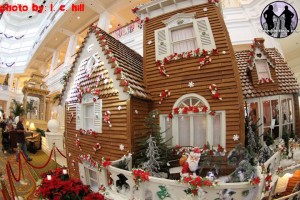 The house is built from a wood frame foundation, and then the gingerbread is applied on top of it. It takes workers about a month to assemble everything. All of the decorations, such as Santa, are made of chocolate. In fact 700 lbs of chocolate are used to create not only the little details, but also the house itself.

The house is open from 10 a.m. to 10 p.m. and features a mini bakery inside the house itself that you can purchase gingerbread made from the same recipe that the house is made from. You can also purchase other holiday treats as well.
More Grand Floridian Gingerbread goodness:
TAGChristmas 2011 Gingerbread Walt Disney World
Previous PostHollywood Drive in Mini Golf "We got cows!" Next PostOrange County History Center hosing Q&A and Dinner with Universal's Art and Design Team