Harry Potter to cast a spell over Universal Hollywood

The huge success of The Wizarding World has left the Muggle world clamoring for more. In a press conference Tuesday morning at Universal Hollywood, it was announced that the resort will be the next to get the magic of Harry Potter. Hundreds gathered draped in Hogwarts House colored scarves as a group of children,wands in hand took the stage. Soon after, a familiar site to any Harry Potter fans as James and Oliver Phelps took the stage. 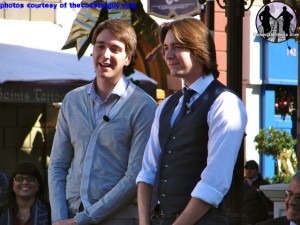 “Hogwarts is coming to Hollywood!”
It’s official, The Wizarding World of Harry Potter will be coming to Universal Studios Hollywood. The new expansion will be built in an existing area of the park.
The park will bring the iconic Hogwarts Castle along with the signature ride, Harry Potter and the Forbidden Journey.

I am delighted that The Wizarding World of Harry Potter has been so popular with fans since the opening in Orlando last year and I am sure that the teams at Universal and Warner Bros. will bring their expertise and attention to detail to Hollywood to make this new experience equally as exciting, said J.K. Rowling.

The Wizarding World of Harry Potter was opened in 2010 at the Universal Orlando resort. The attraction helped to raise attendance 36% in 2010, and has helped boost Universal Orlando’s profit. The announcement wasn’t only good news for California, but for Florida as well as it was announced that the Orlando parks Wizarding World would “significantly Expand”. No details were given, though rumors are running rampant that the new expansion will not only take over more of Islands of Adventure, but also the Amity Section and Jaws ride of Universal Studios Florida next door. Universal recently announced that it would be closing the area and attraction in January to make way for a new experience, further fueling the rumors. For more on the rumors, plus some thoughts and how it could effect the rest of the Universal Orlando resort, including events like Halloween Horror Nights, click here!

What we know of the Wizarding World in Hollywood so far:

In Orlando the Wizarding World is home to Olivanders Wands, Two Coasters (three if you’re a credit counter) a restaurant and the resting place of the Hogwarts Express. The entire area is themed to Hogsmeade Village.
Our friend Kurt from The Coaster Guy was on hand for the festivities which included a Butterbeer Toast 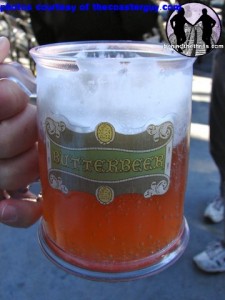 This was the first time many people on the West Coast have been able to experience Butterbeer. So how did Kurt like it?
“I loved the butterbeer! I’m a huge cream soda fan, so it gets a huge thumbs up from me.”
The Governor of California, as well as heads of Universal Studios, and Warner Brothers were also on hand. The economic boon that Orlando has seen because of the Wizarding World has been unprecedented.
httpvh://www.youtube.com/watch?v=AizdIMsUu60
Travel to Orlando has gone up, as well as hotel occupancy rates. Can Universal catch lightning in a bottle again with the Hollywood version of Potter?

Here’s a video from Universal Hollywood, showcasing highlights from the announcement.

More pictures from the announcement courtesy of The Coaster Guy

No opening date has been given yet on either parks expansion, but we will keep you updated as we learn more!

For more information about the Wizarding World of Harry Potter in Orlando, visit the official Universal Orlando website!