Park of the Year-The Finalists are…

It’s been an amazing year for theme parks all over the country. Over the past four weeks we’ve asked you to name who you thought your favorites were. Each week we’ve rolled out a new poll, with a new section of the country. The top two parks in each region made it to this point, the finals. Each finalist will battle it out for the title of “Park of the Year”.

Each park that has made it to this level is the best at what they do, and deserves to be there. Unfortunately only one park can be claim the title of “Park of the Year”, but before we get to the voting, here are the parks that claimed the title for each region, along with the finalists. 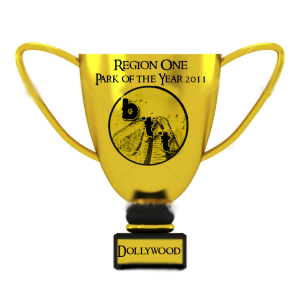 Dollywood is one of those great parks that makes you feel at home. They’ve had a great past couple of seasons with new thrill rides, family shows, and the announcement of the first B&M Wing Rider Coaster-Wild Eagle coming for 2012. From the existing attractions, shows, food, and employees, Dollywood is becoming one of the first names guests think of when planning a family vacation. 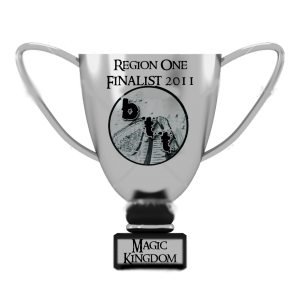 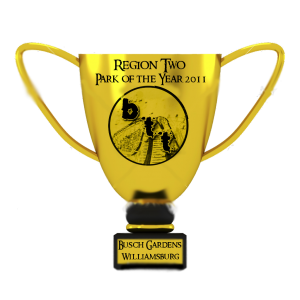 A brand new Octoberfest section, new shows, a new ride, and the announcement of one the most anticipated coasters of 2012, if not all time, Busch Gardens Williamsburg earns it’s place at the top year after year. Each year the park seems to kick old events into high gear, such as the amping up of Howl O Scream, the expansion of Illuminights, and even more concerts. Keep your eye to the horizon for the next few years. You never know what might ride out of the darkness, or may be coming round the track, or what they may resort to soon. 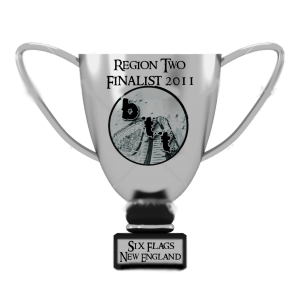 Fans love the coasters. With the announcement of new inverted trains for Goliath at the park, plus all the other great thrills the park is known for, Six Flags New England edged out the other Six Flags parks in Region two. 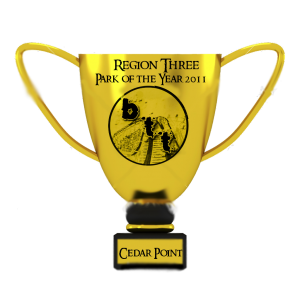 The Roller Coast, Cedar Point, dominates the landscape with several record breaking coasters. All new for 2011 was Windseeker. Coming in 2012 is Dinosaurs Alive. Top Thrill Dragster, Millennium Force, Maverick, are all the things that make coaster nuts tick. Cedar Point proudly takes the title of Park of the Year in Region Three. 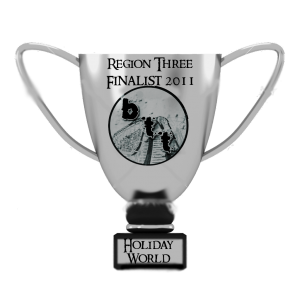 Holiday World is the little park that does. Forget “I think I can” or “we will do it”, Holiday World does things that other parks of it’s size simply will not, or can not. Record breaking waterslides, an amazing array of family friendly coasters, some of the friendliest employees in the country,  and one fun theme puts Holiday World at the top of the list. 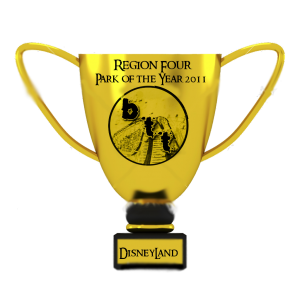 Who’s the leader of the parks that’s made for you and me? It was the original, and voted the best by you! Disneyland in Anaheim is home to some of the world’s classic attractions and is seen as many as the birthplace of the modern theme park. Disneyland has gotten a ton of love over the years, and next year it’s sister park, California Adventure will complete a $1 billion dollar make over. 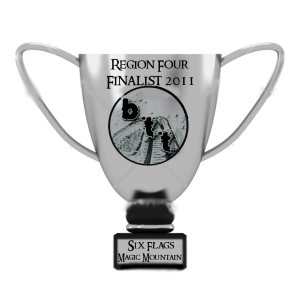 The current Coaster Capital of the World, Six Flags Magic Mountain runs head to head with Cedar Point in the thrills department. This year they added another 4th Dimension coaster with Green Lantern:First Flight. They will lose a coaster in 2012, and go back to tying Cedar Point, but they will be adding the insane Lex Luthor’s Drop of Doom-400 feet straight down.

Congratulations to all of the Regional park of the year winners, and all of the finalists.

Now the fun really begins! Below are the top eight parks in the country as voted by you. What happens when we pit the top in separate regions against each other? Can your favorite park win?

You can vote once daily, so remember to keep checking back and cast your vote for your favorite park! The winners will be revealed in our special Thrill Weekly Awards-Best of 2011 in the first week of January!

If you are with a nominated park, we strongly recommend encouraging your Facebook fans, Twitter followers, and other social media outlets to vote for you daily. After all, if your fans do not know your park is nominated, they can’t vote for you!
Have Fun, and Good Luck!
TAGPark of the year Thrill Weekly Poll 2011
Previous PostErik's Advent Calendar-3 Days til Christmas! Next PostBusch Gardens mobile app makes it to the Android Market