Legoland Florida opened in October of last year and made a huge impression with families. For their first year they don’t intend on letting the excitement die down. The park has many huge events planned for guests including a huge birthday celebration. 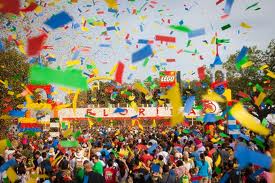 The events range from events aimed at girls, to the whole family. The biggest event looks to be the Brick or Treat Halloween spectacular.
List of events:

• LEGO® Friends Weekend is a daytime party for girls that includes a LEGO Friends building event, entertainment, games, activities and much more. This first-ever event celebrates girls and their personal individuality, just like the LEGO Group’s newest line of construction toys. March 24 & 25, 2012

• Runners and walkers can play – or run – their part during the Winter Haven Hospital Foundation Citrus Classic 5K. This community-wide health event is designed for participants of all ages. April 14, 2012*

• Celebrate the 4 th of July with a bang at LEGOLAND Florida’s first Independence Day event – Red, Brick & Boom. With special 3D glasses that turn ordinary fireworks into millions of exploding bricks, this July 4 th celebration is sure to dazzle and delight. July 4, 2012

• Brick-or-Treat comes to LEGOLAND Florida every Saturday and Sunday in October. This spooky, kooky event features themed treat stations with candy, snacks and a few surprises along the way. October 2012

• ‘Tis the season for Christmas Bricktacular at LEGOLAND Florida with a 270,000 brick Christmas tree and festive decorations. Santa Claus makes daily appearances in the park. Weekends in December

All special events are included with park admission, except the Citrus 5k. It sounds like there will be tons of great events to bring in guests. Now if they could just get a Lego Harry Potter festival happening with the stars from the movie, but in time.
For more information or tickets visit the official Legoland Florida website.