“Revenge of the Mummy” has computer glitch, causing an evacuation 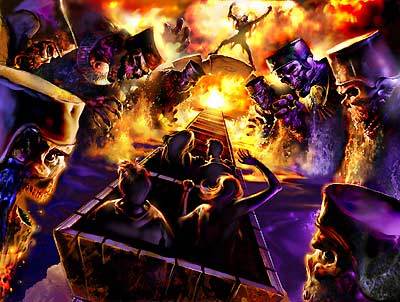 Twitter user @BlackSmoke108 reported the Revenge of the Mummy roller coaster partially derailed and stated that no one was injured. Fire trucks and ambulances are still on scene at Universal Studios. No official details have been released on the condition of the ride or what caused the trail to derail.

EDIT 7:30pm: According to @RHughesWFTV, a Universal spokesman stated that Mummy and ET both had computer glitches and a train did not derail (not even partially), even though the Orlando Fire Department stated the ride derailed.  Several attractions throughout the day had issues shutting them down periodically, including Mummy, ET and Men In Black. All rides have since reopened and are operating as usual.

A train derailment is a very serious condition, and has caused injuries on other rides across the world. Thankfully, no injuires have been reported at this time. It’s very possible we could see the attraction close for repairs and inspection.

According to @RHughesWFTV on Twitter, all riders have been safely removed from the ride.

Here’s some more tweets regarding this evening’s incident at the ride:

This is a very unfortunate event, but not the first time that Universal has kicked off the new year with a tragic event. January 1, 2011, Dudley Do Right’s Ripsaw Falls at Islands of Adventure caught fire, forcing Universal to close the ride to repair fire damage.

Stay tuned for more information on the condition of the Mummy roller coaster.

TAGAccidents Coasters Rumors Universal Studios Florida
Previous PostJaws closing tomorrow at Universal Studios, get your last rides in! Next PostBaby Giraffe to be newest member of the Serengeti