For close to ten years, Spooky Empire has called the Wyndham Resort on International Drive home. Last year the resort was sold, and it was said that it would close down. Initial reports said that it was to be torn down and something else done with the property. That left the annual horror festival without a home. But leave it to the gang at Spooky Empire to not leave fans hanging for long. 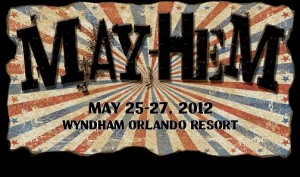 In an official press release, the Spooky Empire crew announced that they have found a new home, the Orlando Hilton

The Hilton has a ton of amenities, too many to list, plus an amazing convention area.

So far this year’s Mayhem guests will include:

On top of the celebrity guests, there will also be live bands, an exhibitor floor filled with horror art, books, films and memorabilia. More information, including a full line up will be coming soon.