We can’t tell you how much this SOPA thing needs to get shut down. Instead of shutting the site down, I tried to write this big long diatribe on how we need to stand up and tell our lawmakers that this is no good for free information. But I tried from my phone, so it was lost…three times. Sorry. Really though, the open ended words of this thing pretty much leaves it open for the companies to set the copyright laws as anything they see fit. So, when we run rumors about Howl O Scream, instead of HOSInsider calling me a knucklehead on Facebook, they would be able to say “that’s our information, copyright infringement” and we would not only be forced to take it down, but also fined. I love you guys, and love writing this stuff, but let’s face it. BTT don’t pay the bills. And if this law passes and companies get their way, you think you’ll get leaked plans from the confidential “Harry Potter” plans? Trip reports could also be in danger..the implications are endless.

If you are unaware of what’s going on, a law is being passed that will try to stamp out online piracy. While that is a good thing, the bad thing is that, as I said, it leaves way too much open for interpretation. And the implications aren’t only that it will hurt “silly little blogs” like ours, but it could also potentially damage the information/technology industry and cut tons and tons of jobs. While I’m not a wealth of information about this topic, I strongly urge everyone to read more in depth about it. It’s not often we get political, because politics suck…but this is something that congress can not let through.

Arthur Levine over at About.com is holding his second annual “People’s Choice Awards”. You can write in your choice for several “Best New” categories in the theme park world. After the nominations are received, then you’ll be able to vote on the top contenders. Sure, it’s not two months of Polls resulting in one amazing list….but it’s still a lot of fun. GO NOMINATE YOUR FAVORITE THEME PARKS NOW!

I’m not a fan of Disney Channel shows anymore. But it looks like I might have to tune in. A woman claims in a lawsuit that she got spanked on the ass during a taping of Good Luck Charlie. Sounds like a fun show, except her kids were right there watching. Not the good time for some red butts. More details

President Obama will be heading to Walt Disney World Thursday to deliver a speech about the state of jobs. He will be making the speech from the Magic Kingdom. However, guests will not be able to watch it from in front of the castle, but from the Hall of Presidents. This article says he won’t be in Orlando long, but our sources say that Magic Kingdom will not be part of Extra Magic Hours, and that nightly fireworks will be moved to Hollywood Studios for one night only. Sounds like Obama is sticking around to me.

According to his official Twitter page, and the blubbering masses at KDFansite, John Pagel will be stepping down as PR manager of Kings Dominion. According to his Twitter, he will be taking the reigns of PR at “a park in Denver Colorado”. Our guess is Elitch Gardens…but it could be ANY park in Denver Colorado. John was the PR manager for many years at Kings Dominion. Good luck Mr. Pagel. The fanboys at KDfansite will miss you terribly…but I’m sure they’ll harass the next PR manager just as much.

Plans have been made public that Holiday World owners are actively looking at the possibility of taking over operations of the defunct Kentucky Kingdom. As of right now it’s still in the “fact finding stages” but what better company to operate a park like Kentucky Kingdom? Their family sensibilities would go over well in the Kentucky area, and their legendary customer service would be a nice change from the other local “coaster parks”. Full details.

The Legendary Coney Island Cyclone is going to get a major overhaul. Over the years the coaster has become known as not only a legend, but also a chiropractor’s dream. The coaster is rough and feels like going over a bumpy road. The company that owns it hopes to change that. Of course, coaster geeks are pissed about it worrying that it might make it less of a legend. Sure, because we want to keep it just the way it is so people don’t want to ride it. More details

The godfather of all comedy and cartoons, Chuck Jones is getting his own Vegas attraction. The Chuck Jones Experience will feature animation samples, a theater and workshops to see how you measure up. Jones is the father of Bugs Bunny, Looney Tunes, and many many many more of your favorite cartoons. Full story

Sea World Parks and Entertainment has partnered with Ruckus Media Group to create digital storybooks about the animals found in their parks, and the natural world they inhabit. The books will feature, of course Killer Whales, and more. Portions of the proceeds will go the SeaWorld&Busch Gardens Conservation Fund. Full story

This is a step in the right direction. Blood Manor will have it’s doors open for a special Valentines Day Haunt. Gotta love it!

For all of you into movie news, Chuck Norris may be a badass, but he’s the reason that The Expendables 2 will get a PG13 rating instead of a big bloody R rating that the first one had. Full story

For fans of Nickelodeon’s series Avatar:The Last Airbender you’ll be happy to know they are releasing a sequel, Avatar:The Legend of Korra. It takes place 70 years after the events of The Last Airbender and sees the granddaughter of Ang and Kitara become the Avatar after Ang dies. Sounds like it has promise

All I’m going to say about Abraham Lincoln:Vampire Hunter is that the HHN writers of Bill and Ted better come to the table with it. This screams Bill and Ted 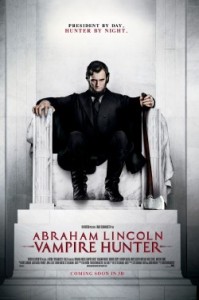