Cranes on the castle,Art of Animation and more!Huge Disney photo update!

There’s somethings that are just cool, no matter how many times you see it or how common place it may seem. One of those cool things happens to be a group of workers in a crane bucket working on Cinderella’s Castle. We have a huge photo update this week from Walt Disney World! We take a look at work going on at the Castle, Fantasyland, Big Thunder Mountain and of course Art of Animation. 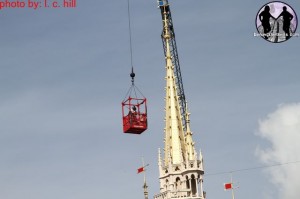 Being the heavy equipment operator that I am, I just love seeing any kind of big massive equipment around well known landmarks. Call it a kink. I have no idea what the workers were doing to the castle. Perhaps they were taking down the LED Icicle lights from Christmas. Maybe they were cleaning off cobwebs. I don’t know…I don’t care. It’s a crane at Cinderella’s Castle with guys inside the bucket! It’s cool on it’s own! 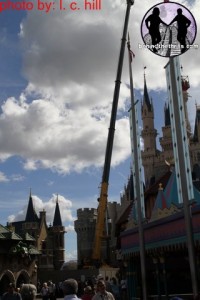 Meanwhile elsewhere on Main Street U.S.A. construction walls are everywhere! It’s just that time of year again when the parks use this time of year to make some changes, and tidy up a bit.

Fantasyland is fleshing out nicely with tons of new paint, signs and of course RAILS on MERMAID!

Finally over at Art of Animation, the resort is coming to life. Almost literally! More static figures are moving in, as well as more doodles on the walls. 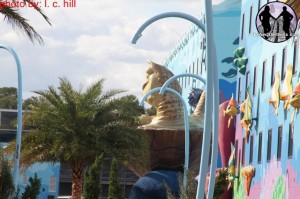 Check out Crush and Dory! Whoa! They seem like they’re chillin, drifting alone the EAC..sweet. That resort is set to open later this year.
More Art of Animation: