“I’m goin to Disney World!”-Why it works better than other parks

“Hey big time athlete MVP of the sport in which you just won the championship…what are you going to do next?” The answer is always the same (of sorts) “I’m going to Disney World!”. It’s a campaign that started in 1987 during the Super Bowl to help promote the Disney parks. It’s become an American Icon, and a tradition. Have you ever wondered why it’s always Disney? Wouldn’t you really like to see your favorite sports hero go to another park? Let’s forget that it’s all a paid endorsement, and look at just why other parks wouldn’t work so well. 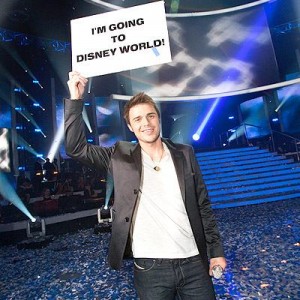 We just have 1 question for you: if you won the #Superbowl, wouldn’t you say “I’m going to Cedar Point!” @Giants you are welcome anytime!

Personally, I’m with Cedar Point. I would rather visit Cedar Point instead of Disney, but the whole tradition is that the very next day the Super Bowl MVP motors down to the park and makes a big spectacle during a cruise down main street and a huge ticker tape parade. It’s a fun time. But with all the other parks in this country, why wouldn’t a football player (or any professional athlete for that matter) choose to go to another park instead?  Well, the fact is…it simply works to go Disney, here’s why.

Again, the biggest reason an athlete says the world famous line is because it is a paid endorsement. Most parks wouldn’t be able to afford the air time, though it would be amazing for an athlete to pull out a wand and say “I’M GETTIN SOME BUTTERBEER!”