After a huge win on the ABC show “Dancing With the Stars” actor/motivational speaker J.R. Martinez decided to take a spin around the Wizarding World of Harry Potter. Of course, instead of tap dancing with dragons, or going for broke in a toe to toe Tango with Voldemort, J.R. decided instead to try his luck with beauties of Beauxbatons Academy. 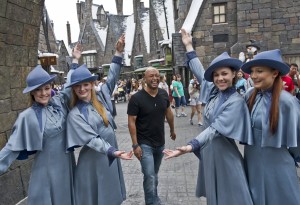 The story of Martinez is a fascinating one all it’s own. Just out of high school, he enrolled in the Army where he was deployed to Iraq. Barely a month into his deployment J.R. was in an accident in which his Humvee hit a land mine. Other soldiers escaped, but he was trapped. He survived with major burns to his body. It didn’t stop him as he pushed and persevered. He became a motivational speaker, sharing his story with others and helping to inspire people everywhere with his sheer will to survive and push to succeed. In 2008 he landed a role on the Emmy Award winning show  All My Children. In 2011 he joined the cast of Dancing with the Stars, where his fighting spirit never gave up, and he came out on top once again. 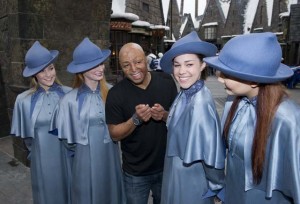 It only seems fitting that a man who actually survived impossible situations enjoy the Wizarding World inspired by the Boy who lived.

For more information on the Wizarding World of Harry Potter, visit the official website!