Time has a way of slipping around you. Time is really relative, meaning that only those that keep track of time are effected by it…unfortunately that’s how our lives are. We are completely and totally ruled by time. Time for work, time for lunch, time for dinner, time to make the doughnuts. It’s a never ending cycle. Today, I finally have time to pick up The Thing prequel on DVD. It was one of my most anticipated films for two years, yet here I am six months (almost) later finally watching it. Slow down, and forget about time. Things aren’t that important…or are they?

My theme park news has all the time in the world!

Disney’s California Adventure is getting a huge overhaul this year. The jewel in the crown will be the amazing looking Carsland. Al Lutz over at Miceage posts this:

According to Al Lutz, an insider from Miceage. Carsland will hold the press event on June 14, and officially open June 15. Special thanks to Kyle Peek for the heads up.

“EDITOR’S NOTE 2/2: The dates for DCA’s grand re-opening event have finally been chosen. June 14th will be the media day and private celebrity party, and June 15th will be the official first day of operation for customers. There will only be a handful of days for AP Previews and soft openings for Cars Land in early June, and those dates aren’t confirmed yet. June 15th will also kick off DCA’s new operating schedule of daily 8AM to 11PM hours through the summer. – Al Lutz”

Today is the 45th anniversary of the announcement of EPCOT…the Experimental Prototype City of Tomorrow. It would be a 50 acre air conditioned prototype city where time would never stand still.
“EPCOT will take its cue from the new ideas and new technologies that are emerging from the forefront of American industry,” said Walt. “It will be a community of tomorrow that will never be completed. It will always be showcasing and testing and demonstrating new materials and new systems.The video below shows the original plans for EPCOT. You can see a lot of things that were borrowed from that concept,but never used. Do you think Walt would approve of the current state of EPCOT?
httpvh://www.youtube.com/watch?feature=player_embedded&v=WVf3-e0O4yA

One of the coolest fun little details are the old school style attraction posters at the Disney parks. It’s only a matter of time before the new attractions appear at Disney’s California Adventure, well they are getting a sneak peek courtesy of Disney Parks blog.

The Disneyland Adventure App is here! Take a stroll through your favorite attractions via your iPhone or iPad
httpvh://www.youtube.com/watch?v=o-dR3F_L3c4&feature=player_embedded

Morey’s Piers has begun rock work on their all new “River Adventure” water park attraction. Inspired by Typhoon Lagoon, and other water parks across the country, this attraction is going to be a great place to relax.Full details 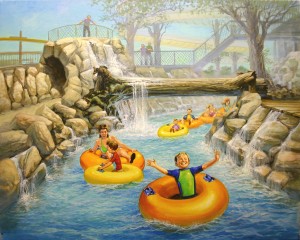 If Holiday World is successful in reopening Kentucky Kingdom, what’s the one thing that visitors will need? If you said hotel rooms, you’re absolutely right. In a fascinating study of how a theme park effects local economies, CEO of the largest Kentucky based hotel operator, is in talks to help Holiday World reopen the park. At it’s peak, the park would generate 10,000 hotel nights a year. If the park is closed, well that’s a big dent in the economy.Full story

Dear god, PETA is upset at another animal based waterpark. Again. The “animal rights activists” are upset that Sea World in Australia serves fish at their restaurants. It would be one thing if the park goes into the tanks, spears a fish and brings up on your plate, but like all theme parks, Sea World buys it’s fish from different markets. If PETA would only use their powers for good. Full story

It wouldn’t be the Super Bowl without a massive theme park ad. This year Universal Hollywood is taking to the small screen by letting Optimus Prime warn you. The full ad will run Sunday, but here’s a sneak peek
httpvh://www.youtube.com/watch?v=f1F-eGddzKI&feature=related

Newplusnotes has done a little bit of digging around and found plans for the new Fun Spot expansion. While nothing really majorly groundbreaking here, the surprise comes in that Fun Spot is looking at getting a Windseeker! A smaller version than the Cedar Fair versions at only 225 feet tall, but still…a windseeker! The GCI wooden coaster will have a height of about 65 feet tall, and have a metal under structure. I guess Gwazi is the lesson learned about wooden coasters in Florida.

Ride of the Day
Music is the life blood of just about any imagination. The images painted by the sound can be better than the pictures made by brushes. The same can be said about theme park rides. If you go to Six Flags, you get a coaster. If you go to Disney you get the same coaster…but you add music and some themeing and you get an attraction. Today’s ride of the day isn’t a ride in any park, but a great ride that only music can take you on. Enjoy!