His skin is cold to the touch, they live out of the reach and temptation of humans, and they hang around with werewolves. No, we’re not talking Edward and the Cullen family from Twilight! Today one of the stars of the Twilight Saga-Breaking Dawn Part One was in town to promote the DVD release of the film. BooBoo Stewart appears as one of the werewolves in Breaking Dawn, and got to hang out with another pale star. This one won’t suck your blood, or sparkle in the sunlight…thank goodness. 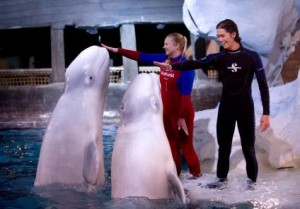 One of the most intimate of the tours at SeaWorld is the Beluga Interaction Program. It takes you behind the scenes and puts you face to face with these whales, who are actually more closely related to the dolphin family. 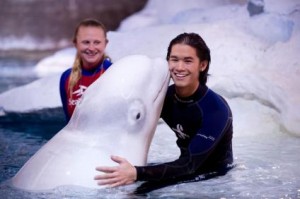 Booboo plays Seth Clearwater in the Twilight Saga, one of Jacob’s “werewolf” buddies. In Breaking Dawn he plays a pretty important part in the film. He’s in Orlando to promote the midnight premiere of Twilight Breaking Dawn Part One on DVD.

Now, beluga whales don’t get out to the movies much, but Twilight is such a worldwide phenomenon that even the animals got a chance to see the film. So what did the whales think of Twilight Breaking Dawn? I think this picture sums it up: 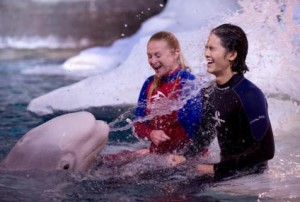 Check your local stores for all the Breaking Dawn premieres and sales happening in the area. Perhaps you’ll get a chance to see Booboo in person.

For your own chance to get up close and personal with an amazing Beluga Whale, and for more information on the Beluga Interaction Program visit the official website!