End of an era at Disney 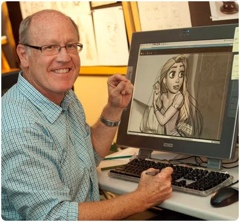 It’s the end of an era. Glen Keane, A 38 year veteran of Disney’s Feature Animation studio, is moving on. Keane has worked for Disney since 1974 with only a short brief of leave in 84′. He has worked on classics such as “The Little Mermaid”, “Beauty and the Beast”, and “Aladdin”.
Disney artists received an email late friday afternoon with the subject:

“Glen Keane has decided that the time has come to take the next step in his personal exploration of the art of animation.”

Here’s what the letter said that Glen sent out to his Disney co-workers:

“Dear Colleagues and Friends of the Walt Disney Animation Studio, After long and thoughtful consideration, I have decided to leave Disney Animation. I am convinced that animation really is the ultimate art form of our time with endless new territories to explore. I can’t resist it’s siren call to step out and discover them. Disney has been my artistic home since September 9,1974. I owe so much to those great animators who mentored me—Eric Larson, Frank Thomas and Ollie Johnston—as well as to the many other wonderful people at Disney whom I have been fortunate to work with in the past nearly 38 years. Over these four decades I have seen so many changes, but the one thing that remains the same is that we all do this because we love it. I am humbled and deeply honored to have worked side by side so many artists, producers and directors during my career here at Disney, and I am tremendously proud of the films which together we have created. I will really miss working with you. With my most sincere and heartfelt good wishes for your and Disney’s continued artistic growth and success,