Shark Encounter at SeaWorld Orlando is one of the most awe inspiring attractions in the park. It has gone from viewing a decomposing Great White Shark under glass (true story!) to an educational film and a small walkthrough a glass tube to a full blown attraction. While the main focus of Shark Encounter has remained the same throughout it’s existence, the way that it has gotten the message across-that sharks aren’t as bad as you might think, has changed. Now that method has changed once again, and drives home the importance of being aware of these ferocious looking, but misunderstood fish. 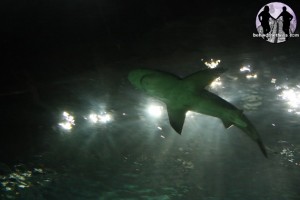 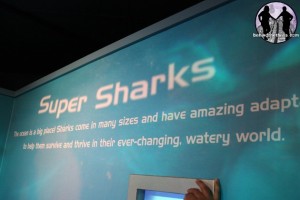 The exhibit is right before the big tunnel tunnel of sharks, and serves as a an education tool to tell how sharks not only help the ocean, but are also being hunted to the point of extinction. 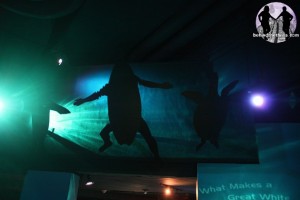 One of the most popular myths about sharks is that they are man-eaters, that is, they hunt humans like we’re hamburgers. In fact, as you can see in the picture above, from the point of view of the sharks, we look just like their natural prey. Most all of the shark attacks on humans are not because they want a human snack, but because of mistaken identity. Sharks sense vibrations, and to them what you call playing at the beach is a signal that a fish in distress and is easy to catch and eat. 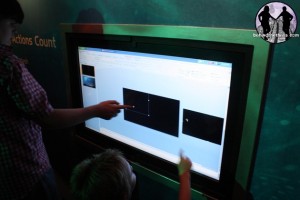 Several new interactive elements have been added, such as a touch screen that allows you to compare different species of sharks and see facts about them. 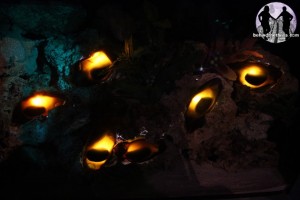 Another interactive element is the addition of a shark pup hatchery. You can see live shark eggs in a sort of incubator. Hit the button and the light comes on revealing the baby sharks inside. 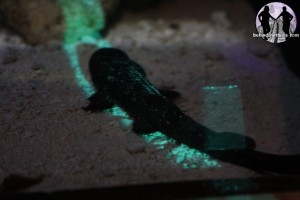 Shark babies are called pups, and can be born live and swimming, though most are born from eggs. The biggest problem is that sharks reproduce at such a slow rate. People are fishing them and killing them faster than they can repopulate, and we are in danger of losing a lot of the hundreds of known species of sharks. 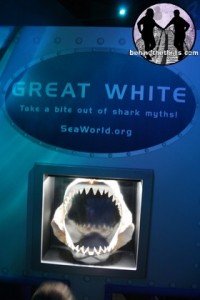 Another new feature is the chance to get inside of a set of Great White Shark jaws. Guests can crawl in through a pop up, and see what it would be like…somewhat…to be in that set of teeth.
It seems like the hope with the new exhibit at Shark Encounter is to inspire people to pay attention to these amazing animals. Like so many before me, I was deathly afraid of sharks, but it wasn’t until my own experience at SeaWorld’s Shark Encounter that I learned they aren’t what they seem. I spent quite a few years studying the animals, and have a better understanding of how important they are to the ocean and the world.
More Shark Encounter pics:

For more information about Shark Encounter, or to purchase tickets to SeaWorld, visit the official website!