The Sky is not the Limit! You could win a trip to Dollywood

Wild Eagle, the all new B&M Wing Rider coaster is all set to make it’s debut this coming Friday! Dollywood has a chance for you to win tickets to the park this year, not only that but you can also help choose which version of Dolly Parton’s theme song will be used for the ride. That’s right, Dolly Parton made a theme song for Dollywood’s newest Roller Coaster.

If you head over to the official Dollywood Facebook Page (click here) you can vote on one of three different versions of the song.

The song is done by Dolly herself, and you have your chance to choose which version is your favorite. The song is called “The Sky is not the Limit”. The three versions are a “Ballad” version, with huge sweeping vocals and a great guitar solo in the middle. Then you have a “country” version with a distinct bluegrass feel, and upbeat tempo. Then there’s the full orchestral version which includes sweeping vocals, an upbeat tempo and a ton of instruments.

We’ve taken a few seconds of each song to give you an idea of what it will sound like.

The Sky is the Limit

Very uplifting and encouraging. You almost expect to hear this in an inspirational movie, but instead you get to hear it as you soar above Dollywood on Wild Eagle.

Once you hear the sampler, head on over to the official Facebook Page and enter to win two free tickets to Dollywood and ride the all new Wild Eagle where the “Sky is not the Limit!”

And Dollywood isn’t new to the songs for their rides. They made a cool little song for Mystery Mine when it opened in 2007

And of course Disney is famous for it with The Pirates of the Caribbean, Haunted Mansion, and Big Thunder Mountain
httpvh://www.youtube.com/watch?v=AXmb59YLRUs 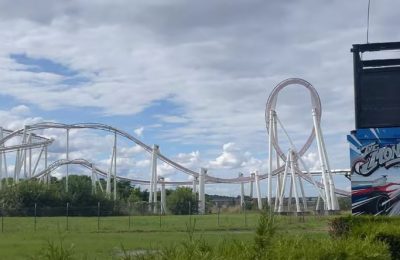