Disney theme parks were built on movies. Many of the first rides at the parks were modeled after the feature films that made the studio famous. Snow White, 20,000 Leagues Under the Sea, and Alice in Wonderland all received the theme park treatment after the films were made timeless. However, since 1997 Disney has had little success in reversing that trend with very few exceptions. Now, however, the studio goes back to the park once more to try and find a little Hollywood inspiration. 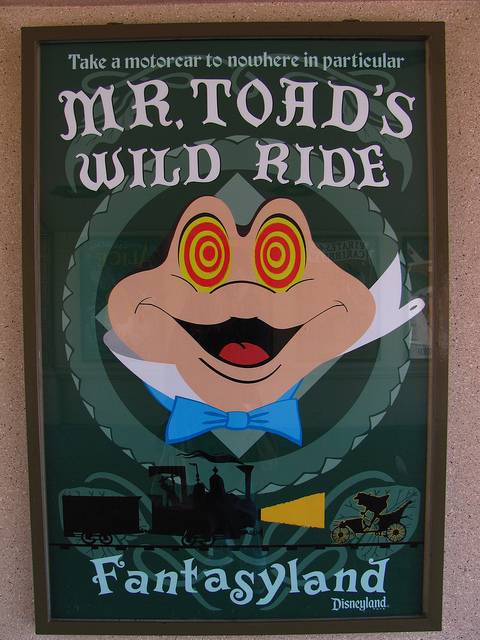 Mr. Toad’s Wild Ride is the next film that the movie studio looks to turn into the next blockbuster feature length film. The ride itself is actually based off of the movie “The Adventures of Ichabod and Mr. Toad”. The movie combined to separate stories, one being the animated version of the Legend of Sleepy Hollow, the other being an adaptation of The Wind in the Willows. When Disney bought the rights to the book of the same name, he was concerned that it would seem too cheesy. The film began production, but World War 2 stopped production of on the film. When the production picked back up, the animation was deemed below standards, and a lot of scenes were scrapped and the film was cut. On the other foot, the story of Sleepy Hollow was deemed to short, so the two films were packaged together.

The ride based on Mr. Toad was built first in Disneyland, and then in Walt Disney World and it follows the adventures of Mr. Toad as he goes on a ride to nowhere in particular. On his journey he runs things over, causes havoc, goes to jail, breaks out, then dies and goes to hell. Yes, in a theme park ride you actually die and go to hell! While the Disneyland version is still open, the Walt Disney World version was closed in 1998 and replaced with Winnie the Pooh. Many fans of the park still protest over this decision, as Pooh seems to be a watered down version for kids, and replaced an original attraction that opened with the park.

Fast forward fourteen years later and the ride in Disneyland is still open, and still drawing a crowd. The ride is so popular, and the ride in Florida so well remembered that now talks are shifting to bringing the classic story back to life. The company is in talks to make a film(via CinemaBlend) that combines live action with computer animation to tell the story of Mr. Toad, Badger, Mole and all their friends. Pete Candeland is set to direct.

So this raises several questions. Will the movie be based off of the original 1908 books, the 1949 short film, or will the studio throw caution to the wind and base it off of the ride? In the original story, Mr. Toad doesn’t die and go to Hell…so would this be deemed to racy even for today’s standards? Perhaps, but then again, The Hunger Games (a movie in which children kill children to entertain the masses) was sold as a family film. At this point a script hasn’t been worked out, so it’s possible the film won’t even get off the ground.

However, Disney has had a habit over the bast 15 years of making films out of attractions. It started in 1997 with the straight to video Tower of Terror. In 2000 Disney resurrected the classic attraction Mission to Mars. Neither film was a huge success. Then in 2002 Disney had the breakthrough hit The Country Bears….just kidding. The film cost $36 million to make and made $16 million worldwide. Just when you thought it was safe to back to the theme parks…Pirates of the Caribbean opened. The film was originally supposed to be a serious take on the ride, but Johnny Depp screwed it all up and played the character of Jack Sparrow as a pirate version of Keith Richards. It worked, and the film went on to spawn three sequels, with a fifth film scheduled sometime soon. In that same year Disney released the family comedy The Haunted Mansion with Eddie Murphy which also failed. Since then, Disney has announced they would make movies based off of Space Mountain, The Jungle Cruise, and most recently The Matterhorn. All of which have not started production. However, it is noted that once the Pirates of the Caribbean films became huge the ride then went through a major overhaul in which the main characters were added into the ride. If Mr. Toad should happen to get made, could we perhaps see an overhaul to the Disneyland attraction? More importantly could we see Mr. Toad return to the Magic Kingdom?

It’s also worth noting that Mr. Toad’s Wild Ride was already released in 1996, and was directed by Terry Jones from Monty Python. It went straight to video in the states and was released to wild success in the UK as “The Wind in the Willows”.

So would you go see a CGI version of Mr. Toad in theaters? Let us know in the comments below!