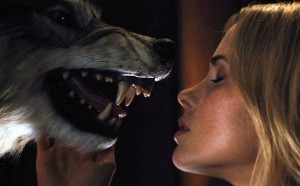 This week’s Offsite Adventure-The Cabin in the Woods

Do you like scary movies? What’s your favorite scary movie? Take what you know, and put it in a blender. That’s what you get with the new film “Cabin in the Woods” written and produced by Joss Whedon…who is going to blow our collective socks off in a few weeks with The Avengers. The Cabin in the Woods is a horror film that tells a pretty familiar story about five friends who go to a cabin…in the woods…for a weekend of fun, debauchery and drunken debauchery. It starts as your stereotypical horror film with everyone playing their familiar parts. Where it takes you later is what all the fuss is about, and it takes you to some pretty great places in pretty great ways.

Is the movie good?

I really feel like if I told you anything at all about this movie, it would ruin any kind of surprise for you. Let’s wrap it up nice and quick then shall we? The movie has the guy from THOR in it. He’s good, and he’s a hunk. It has some pretty hot chicks in it, some tits and ass. It has comedy and jump scares as well as plenty of gorey goodness. The film starts off as a very cliched horror film and goes off into territory that you don’t expect. You might be able to see it coming, but that doesn’t matter because it’s such a fun ride to get there. It takes cliche and plays with it, embraces it and explains it. It has no recognizable characters and doesn’t use a license for the same safe horror. It’s no SAW or SCREAM, and it’s not a franchise by any means. It knows what it is, and doesn’t apologize for being that.

That’s really all you get about the plot and details of the film.

Now let me explain why I loved it. Horror has gone to such an odd place these days. Studios are so hellbent on getting teens into the seats that they water down the blood and guts, and make directors play it safe. They also take things like practical effects and “improve” them by making them CGI. Horror was built on pushing limits and doing things as real as possible. Of course, modern movie making is all about making money and not about letting the artist splatter the audience with his vision anymore. It’s really the same way with theme parks. Back in the 80’s and 90’s we were inundated with a huge amount of creative ideas that came from visionary creators. It’s from that era that we got Horizons, Journey into Imagination (with Dreamfinder), Alien Encounter, and Islands of Adventure. If those rides and parks were to be created today it would be only because it could be tied in with a huge movie or book series. It wouldn’t be creative and wondrous just for the sake of being amazing. No, it would only be that way because the source material would demand it, or the company would make more money. Do you think Islands of Adventure would have gotten Harry Potter if it had been the fifth biggest  book and movie franchise in history? Probably not.

And so it goes with movies today as well. We get a slew of movies based on very recognizable names, faces and characters. I love my comic book movies, but I would really love to see a movie made off of The Maxx, or Morbius the Living Vampire. You think it’s going to happen? No! Why? Because you probably have never heard of them. We get remakes of classic films instead because the studios play to our nostalgic sentimentalities. We get sequels to movies that had a successful run 20 years ago because it’s a guaranteed big weekend.

The Cabin in the Woods goes back to that original place, where movies are fun and they use no big names. Yes, the guy that played THOR is huge…but this movie was originally supposed to be released in 2010 before he was THOR. The movie studio that had this film went bankrupt and couldn’t release the film until they got all their money situated. Thank god they did.

A friend of mine argued that this film wasn’t original at all because they take a ton of themes and characters from just about every horror movie ever made and mash them together. Okay, I’ll give you that. But it’s what they do with the characters that make it original! You can’t tell me you saw the great glass elevator and the menagerie of nightmares coming! And the ending is not your typical Hollywood ending, or even your typical horror ending. There is no hope. There is no witty one liner to save the day. It just ends and does so with an in your face “go fuck yourself” attitude.

Who does that these days? There is always some resolve, there is always a gate left open for a sequel or a happy ending, or at least an ending that you can sleep well with that night. And that’s why I loved it. It shows that there is creativity still left in Hollywood. Unfortunately the studio system will not listen unless the film makes a boatload of money. That’s not likely to happen, because it’s a movie that people have turned their nose up at simply because it doesn’t have the names. And there’s the problem.  Visionaries get their visions blocked because we’ve been bred to look for name brands. It’s really frustrating! Because of this, we will be stuck with crappy remakes of halfway decent horror films that should be just left alone instead of really great films that will warp your mind because they’re so demented.

Still, go see Cabin in the Woods. We may yet to see a squid faced incarnation of evil destroy the earth yet.