The last zombie walk to take place at May-hem

For fans of horror and, most importantly, fans of the biggest annual haunt convention in Florida this has been a tough year. First came news that the annual haunt convention would no longer be held at the Wyndham Resort on International Drive where it was born. Next came news that long time friend of the convention, and annual horror fixture Bill Hinzman had passed. But every zombie filled cloud has a brain filled lining. 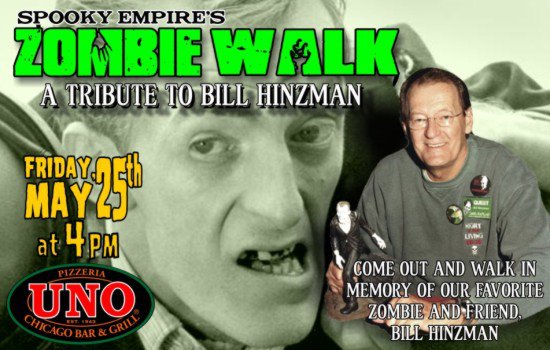 Spooky Empire announced via their Facebook page that there will be one last zombie walk at the place where it all began. The zombie walks have become an annual tradition that takes Orlando by storm. People are encouraged to come out, dress up, and pretend that they’re dead.

More importantly, the walk will be in honor of the first zombie, Bill Hinzman. Bill was the first zombie on screen in the George Romero classic, Night of The Living Dead. He helped to launch one of the biggest trends in horror history.

Spooky Empire will return in October, but it will be at an all new venue. Before they go, May-hem will wreak havoc one last time with tons of guests including stars from The Hunger Games, Rock Goddess Lita Ford, The Walking Dead’s Michael Rooker, Terminator’s Linda Hamilton and many many more.