If you write an ordinance for your employees saying that if they are accused of a felony, they will be suspended until the charges are dropped or they are found not guilty, would you oppose to being held by that same rule? Governor Scott of Florida suspended one of my bosses for committing a crime that had nothing to do with his job. My boss is complaining and threatening court action and all the other nonsense. People are calling Governor Scott an idiot for even worrying about it. Fact is, Governor Scott (and I can’t believe I’m saying this) is doing his job. He is enforcing the rules laid out by the governing body. Granted Governor Scott is governor and was charged (and I believe convicted of) 14 felony counts. Sure, it’s the pot calling the kettle black, but shouldn’t lawmakers be made to follow the rules, especially when they write them? Crazy world and times we live in when lawmakers think they can make the laws fit them.

Fantasyland at Magic Kingdom is all set to unveil all of their big new attractions and expansions next year. Parts will open this year however, and we now get a look at how this has come to life via time lapse

Carnation Plaza at Disneyland park will close at the end of this month to make room for the all new Fantasy Faire Stage, where princesses and heroes will tell tales of dragons, and rescues and all kinds of fun stuff. Full Story

Disney is still pumping the ever loving hell out of the Disney Fantasy, and in a new video they talk with one of my favorite Muppets, Pepe the King Sized Prawn. I love Pepe, he’s a funny guy..shrimp…thing…I love the Muppets so who cares what he is

Earth Day is April 22nd, and Disney wants you to get outside. More importantly they want you to go to Downtown Disney where they will have a bevy of activities and events planned. Here are some of those activities, plus the full story:

Tired of sitting on the phone for minutes waiting for your Disney Dining reservation? Well if you plan to go to Disneyland, you can now email your reservation instead. There are some rules and stipulations, and not all Disneyland restaurants take online reservations. Click here for the full story, but Here’s how it works:

Other
Kids everywhere need to breathe a sigh of relief. There was a motion proposed to the McClean’s Citizen’s Association to Boycott Virginia theme parks. The boycott comes as tourism officials keep pushing to have kids start back to school after Labor Day. Other officials (and your parents) want to get students back in school before Labor Day, making the year long. Florida does something similar, though they did try a few years ago to push it back as school was starting as early as August 4th! Full Story
In Mother Russia, you don’t ride the coasters…the coasters ride you. Okay, so maybe not, but Universal is in talks to build an indoor theme park in Russia called “Galactica Park”. It will be part of a mega sports complex and will include two hotels, a sports arena and convention center. The park is expected to open as early as 2018. Full story
Old Tuscon theme park will close for the summer as the owner tries to get things straightened out and find a business plan that works. Instead of adding coasters and the big amusement rides, the park is adding more educational activities. Full Story
XFlight at Six Flags Great America is now testing, and the park is releasing a few pics: 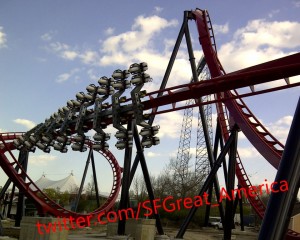 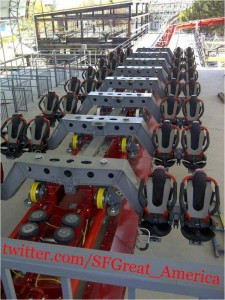