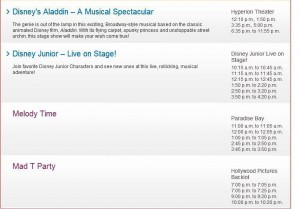 The name of the show is called “Melody Time” and takes it’s name from the Disney film of the same name. The film was a musical Anthology of animated stories set to modern and folk music. It was compared to Fantasia which did the same thing, only set to classical music. The film featured seven different pieces, each about 3-8 minutes in length, including “Blame it on the Samba” with Donald Duck.

If you look at the picture above, the show is just five minutes long, and runs hourly from 11a.m. until about 4p.m. While nothing is known about the show, given the title, the length of the shows, and the frequency of the shows, it seems likely that we can expect to see a different song from the film done every time.

Previously the fountains from World of Color were used for the show “Disney Channel Rocks” which featured tons of fountains in the background as characters danced onstage. It’s very likely the park could be doing something like that again, as the projection aspect would not work during daylight hours. It’s also possible we could see a resurrection of characters like Johnny Appleseed, and Pecos Bill from the film. This seems like the show to do it. The show will supposedly take place in Paradise Bay at Disney’s California Adventure….if something comes from this.

Special thanks to Disneyland News Today for the heads up.

for more information on Disneyland and California Adventure, including tickets, visit the official website!