While the rest of the park was busy waiting for the all new Cinematic Spectacular and Superstar Parade, legendary guitarist Slash was busy checking out Hollywood Rip Ride Rockit at Universal Orlando. The musician was in town performing at the Hard Rock Live just next door with Myles Kennedy and the Conspirators. 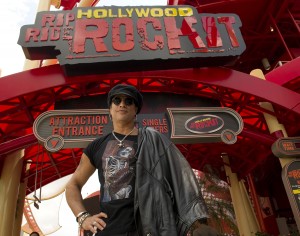 While Slash appears to be too cool to ride the coaster, he actually did take a spin and had ZZ Top’s “Gimme All your Lovin”. The 46 year old musician was recently inducted into the Rock N Roll Hall of Fame along with former band Guns N Roses. Slash performed along with original bandmates, bassist Duff McKagan, guitarist Gilby Clarke and drummers Matt Sorum and Steven Adler for a three-song performance. The Induction will air later this year.

Slash is currently touring with Myles Kennedy and the Conspirators in support of his new album “Apocalyptic Love” which hits stores May 22nd.
Check out the first single from the album

For more information about Universal Orlando, including tickets, visit the official website!