For 100 years Universal Studios has been a movie making mecca. Formed on April 30th, 1912 Universal is the second oldest movie studio still existence behind Gaumont Pictures. Throughout it’s history Universal Studios has produced over 2,400 films and was responsible for the birth of modern horror with films like Phantom of the Opera, Dracula, Frankenstein and the Wolfman. The studios have also won hundreds of Oscars, and have been the launching point for some of the biggest names in film such as Stanley Kubrick, Steven Spielberg and more. The studios have also launched a series of theme parks that were built on the love of movies and getting regular people inside the films. The newest nighttime show at Universal Orlando is an amazing new blend of film, water and fireworks, but it’s something more. A tribute. 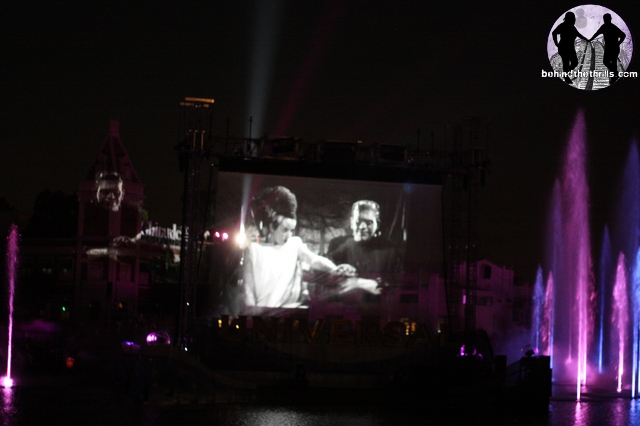 “This is a love letter to Universal films” said show writer Mike Aiello. The show replaces the 360 show that use to inhabit the lagoon, and takes the show away from the balls and puts it in a form that the park has never worked with before. It uses water screens, water jets, fountains and fireworks to pay tribute to the last 100 years of Universal pictures.

The show, narrated by Morgan Freeman, is divided into several different parts representing the different types of films that Universal has made over the years. From the comedies like Animal House and Bruce Almighty, to adventure films, romance, and yes…the staple that saved Universal Studios in the 30’s and 40’s, Horror. 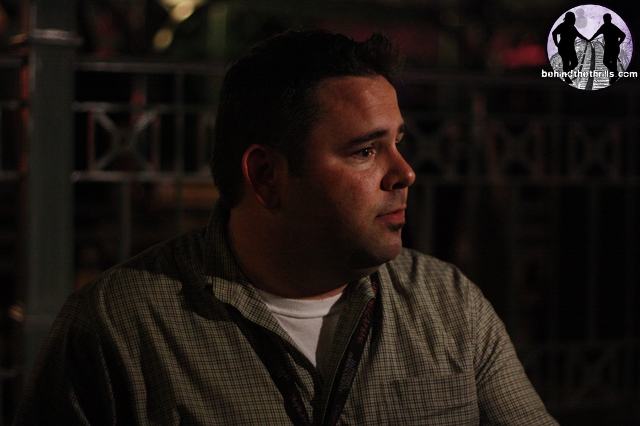 “The really important thing is, what does film do to you when you watch it?” Aiello explained “When you sit in a movie theater you are transported someplace else, you want to be a part of them. That was the one thing that we really wanted to project to our audience while showing the legacy that Universal has.”

The automatic comparison that people who have seen the videos online is to “World of Color”. Both shows use screens made of water, both uses film, both uses water fountains. Where Universal differs is not only in the technology, but in the overall message of the show. While World of Color uses one singular screen to tell the story, Cinematic Spectacular uses three. The message is also different. Where have movies taken you? What have you been inspired to do by the 100 years of Universal films?

The show worked for me. I am, and have always been, a lover of movies. I remember back when Jurassic Park came out in theaters…I saw it twice…in the same day. I remember the first time I saw John Hammond say those magical words “Welcome to Jurassic Park”. I had tears in my eyes. It was every kids dream come to life! Walking breathing dinosaurs! I remember watching Elliot and E.T. fly across the moon on the bike. I was scared to death to go in the water after seeing JAWS. For me, the show was a glimpse at some of the best moments of my life. And it’s probably been said, but I really want Morgan Freeman to narrate my life.

The show uses not only screens made from water that are capable of projecting film clips in near High Definition quality (it’s crystal clear) but the show also uses water fountains to accentuate certain moments. When the Creature from the Black Lagoon comes on, the water turns green. Colors of pink and purple are used to accentuate the love scenes. The jets fan out and fire is rolling on the water, as well as lightning. When we see JAWS, we need a bigger boat because there’s a huge fin cutting in the water in front of us. The show also uses fireworks. Where most nighttime shows have you staring up and watching the fireworks, Cinematic Spectacular uses the fireworks to punctuate the show. Instead of letting the pyrotechnics dominate the scene they add the right amount of emphasis. And then you have the score, which used several well known movie scores to weave the story together. Big plus, Aiello used the epic score from “The Last Starfighter” to give a huge triumphant beginning. 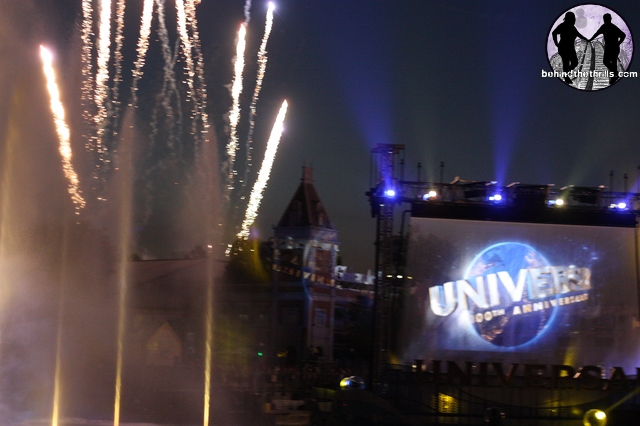 Want to get an idea of what to expect, check out our full length show video:

Other things about the film, it has the capability to be updated with very little effort. It will be used for the entire summer, and the implication is that it can be used for other events. When someone in the crowd asked if the show could be used during Halloween Horror Nights, both Mike Aiello and Jim Timon gave a careful look around the room, started to say something, then hesitated before resting on “Sure….sure we CAN..” and left us hanging with a big grin. The possibility with the technology seems to have many interesting applications that we may still see used.

While we do have the full show, video does no justice to the show. You really must see the show in person. As Mike Aiello said, it is a love letter to Universal films, and a love letter to all those who have enjoyed them.

For more information on Universal’s Cinematic Spectacular, including tickets, visit the official website!