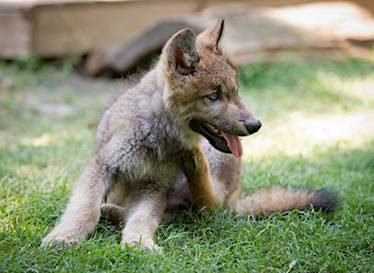 The pup was transported by aircraft to the Newport News/Williamsburg International Airport on June 20th, where he was met by the park’s wolf expert team.

Because of our 12-year experience with wolves and the fact that we already had two wolf pups at the park played a major role in the decision by Idaho state officials to choose Busch Gardens for the pup’s new home,” said Jay Tacey, zoological manager for Busch Gardens.

Tacey said Boise immediately took to his new pack, which consists of the two 6-week old pups and a German short-haired pointer named Mia who is serving as their surrogate mother.

“The young pack mates are getting along and adjusting very well,” Tacey said. “They are playing and discovering their new home.

The wolf pup is named “Boise”, after the capital of the state in which he was transported from. Boise is slowly being introduced to his new pack mates, which currently consists of two pups, which have yet to be named, and a surrogate mother, Mia.

When the pups transition into a larger pack, Boise and his young mates will help to teach the public about the importance of Wolves and other apex predators in the wild.