Making Mayhem- An early peek at Despicable Me: Minion Mayhem

Universal Studios Florida has a distinct history of letting guests “ride the movies”. From the first rides like Kongfrontation and JAWS to even later additions like Men In Black:Alien Attack, the park has that rich history of picking up where the movie left off. Admittedly, the park has shyed away from tradition with rides like The Simpsons and Hollywood Rip Ride Rockit. While they are great rides, they just don’t go along with the “Ride the Movie” theme that was originally such a huge part of the park. Even while great rides like Revenge of the Mummy and Shrek put you in the same universe as the original films, the whole feeling of “we’re in the movie” just isn’t there. Leave it to a an evil genius and a bunch of his minions to change that. 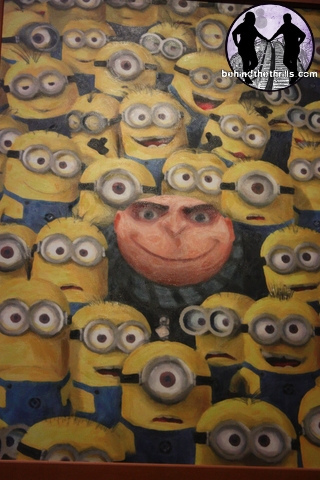 We were invited to Universal Orlando to get a sneak peek at the Mayhem and talk with one of the people responsible for the new attraction, Mike West who served as Executive Producer on the project.

The attraction has been in the making for about a year and a half. The creative process included working with the cast and crew of the film, and the animators to make the ride as loyal to the film as possible. The ride technology uses the same 3D process that was recently used to enhance Spiderman at Islands of Adventure, only with the added fun of the Minions. Interesting enough, Despicable Me marks the first completely CGI film that Universal has produced, which makes Despicable Me Minion Mayhem the first ride based on a Universal CGI Film. 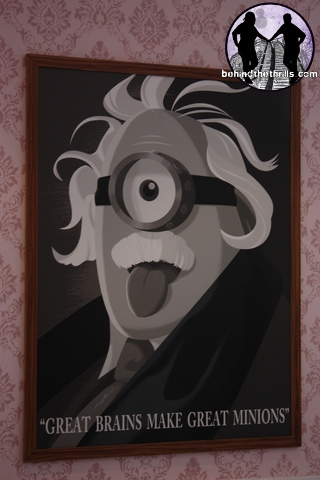 In a word…yes. The ride is very good. It’s actually surprising how good the ride is. On the surface, all the attraction is just another simulator. You sit in a seat, put on the 3D glasses, and you get bounced around. That in itself doesn’t sound very thrilling, but when you add in all the elements, all the ingredients that goes into Minion Mayhem, what you end up with is something that goes back to the days of Old Universal. You are seriously riding the movie.

You start out with the queue, which sells the story of Minion Mayhem. You are touring the facility of Gru Industries and taking the test to become a Minion, and serve Gru in his evil plans…blah blah blah. If you’re not a fan of the movie, or have never seen the movie, the queue video does a great simple job of summing up the story from the first movie, and why you’re here. It’s fun, it’s quirky and it moves you along. Once you get into one of two preshow rooms you are transported inside Gru’s house and inside Gru Industries. Instead of being your average run of the mill theme park ride there is a story being built here. Of course it’s all under the guise of Minion Training, but make no mistake, this ride has a story!

Once you go through the preshows, and Gru tells you that you have no choice but to be a Minion, the girls take over and of course things don’t go as planned. The whole appeal to the first film was that you see a genuinely bad guy, an evil genius transformed into someone who cares about something other than being bad. The girls bring out the good in him, which is still pretty bad…but in a good way. The ride translates that perfectly. You are going to be a Minion, whether you like it or not, but this really evil guy who is now holding you against your will, comes through and shines in a way that you just really don’t expect. It goes from being a ride where “things go wrong with hilarious results” to a ride that tells a story with hilarious and fun results.

Much like JAWS, ET, and even T2 3D, Minion Mayhem takes the next step and builds on the already familiar story while making you care about it. That’s something that fans of the old school days will absolutely love, while new visitors will fall in love with it.

The ride has no real scary elements. It does have some fart jokes, and some silly moments…but even when Gru is acting evil, it’s not threatening. So the ride is actually appropriate for all ages. The height requirement is 40 inches for little ones to ride, and those with back or neck problems may get jostled about a bit. For those who can’t ride, or are too small, you’re covered too. There are stationary seats that allow you to see the ride film, experience the fun, but you don’t get the motion bit.

Minion Mayhem will officially open Monday July 2nd, but is in Technical Rehearsals until then. This means the ride may or may not be open with the park, and may or may not be operating all day. Not all effects are working, which makes me personally want to ride again. What we rode was a work in progress, and it felt pretty complete. One can only imagine what’s going to happen when grand opening comes around.