In the few years that I’ve been writing about theme parks, I have seen some most excellent adventures. Hell, in my life I’ve seen some amazing adventures. My father did the news in Dayton, Ohio for many years. Because of that I was able to see the inner workings of the news industry. I’ve met legendary people such as Dan Rather, Walter Kronkite, Chuck Yeager and John Glenn just to name a few. 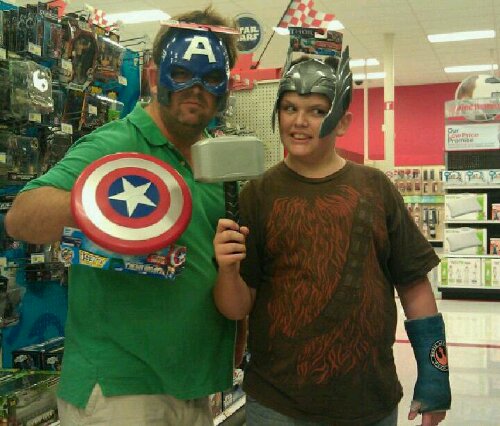 Because of my father I wanted to do great, adventurous things, and for the most part I have. Through this, no adventure has been better than being a father.
Yes, it’s cheesy and cliche, but it is the truth. I became a father at a young age, an age that I should have been in college, drinking, partying, and going out on adventures that everyone at a young age should do. I traded the beer bottle for the baby bottle, violent movies with guts and gore for Blues Clues and the stray pair of college coed panties for poopy diapers. No one said it was a fair trade. But looking back on all the things I missed, I also look back at all the things I was able to experience as a dad. Honestly, I made out better as a dad.

As the mighty Keeper would say, Every day’s an Adventure. It never rings out as true as it does as when you’re a parent. When you’re first a parent you have the discovery of every new day with your child. They see things in a way that we forget. Everything is a wonder, everything is bigger to them than it is to us. It’s a quality that fades away with time, but it’s something amazing while it lasts. Monsters cease to exist in their closets, they can no longer become invisible when they put their hands over their eyes, and the ground stops being lava. The sad truth is that they realize that the world is a much scarier place than they imagine, and the monsters look just like me and you. Instead of jumping out and going “booga booga” the monsters do unspeakable things that no one should have to even try to imagine.

Still, the world of a child is such a great one. In today’s world of cyber bullies, violence and hatred it’s not as easy for them as we would like to imagine, but the amazement and wonder and the ability to do things with them is the thing we most wish to capture. As a dad, it’s the best thing about the job. I love seeing the triumph on my daughter’s face when she pulls bad grades up.

The way my son gets that silent swagger when he accomplishes something he’s tried so hard to overcome. Christmas morning is always the best, the way they still light up at the sight of the smallest of things that thought Santa forgot about.

And as a dad I’ve got stories, most of them embarrassing. My favorites involve theme parks, naturally. Last year, for example, my kids returned to Halloween Horror Nights. The first time both of them went, it was disastrous. Time has made them harder, and it was time to try again. My don had been a few times, but my daughter was scared. She wanted to go. I told her how to keep the actors from coming after her, the things to say, the way to act. So there’s my little blonde hair angel walking through chainsaws, fire and guts smiling, giving high fives and telling the actors they’re doing a good job. My son? Running, screaming and jumping like a little girl should.

Some of my other favorites really aren’t that great of stories. We had been through a rough year, my son and daughter were spending their first Christmas away from their mother. We had divorced the year before, and she had chosen to move out of state and away from them (mostly to get away from me).
Money was tight, and Christmas almost didn’t come. But things worked out and we had the chance to escape to Orlando for a day. I had gotten a great deal on a room at Gaylord Palms. When they walked in, they glowed. We spent the day walking the hotel looking at things, and just talking. We then had dinner at Disney, and watched fireworks. It’s too cliche and not entirely right to say it was magical, but let’s just say things, for the first time in a ling time were right.

Being a dad isn’t glamorous, and sometimes moms get more of the spotlight, but if you’re a dad you know it’s the best job you’ll ever have. As adventures go, you’ll never find bigger.
So, to all of you kids (and especially mine) thanks for the adventures. To all the dads, Happy Fathers Day, may the adventures never end.

Of Dads and Grads-Happy Fathers Day