Offsite-Erik’s meets his maker in Prometheus 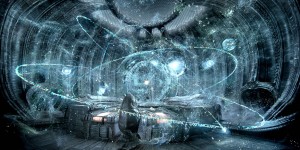 I’ve really debated if I should review this movie. I want to tell you all about it, but if I do that, it’s really a disservice to you and the film. Besides, I’m not really that big of a film critic. I don’t get all into the short comings of performance, or how a movie disappoints by not answering a question. I’m all about the entertainment value. This movie has it.

First to tell you what it isn’t, I have to tell a little about what it is. Prometheus is a Sci-Fi/horror film directed by Director Ridley Scott. This is Scott’s first foray into Sci-Fi since the original Alien film. That film was about a deep space mining ship that answered a distress call. What they found were a bunch of eggs which attached themselves to whatever life they could find, and produced an Alien…a xenomorph. It starred Sigourney Weaver, and contained some of the most beloved monsters we’ve ever loved to fear. In the discovery of the film, the crew discovers what they call a Space Jockey. The Space Jockey is huge, mummified and long dead. What he is, or he is, is completely unknown.

The film spawned three sequels and a group of comics in which they fought another space alien, Predators.

Prometheus takes place before all of that.

The same corporation that sent the mining vessel, takes an expedition to a planet that has been found in ancient civilizations the world over. Their goal is to find the answers to human kind itself. What they find look a lot like the Space Jockey from the very first Alien film.

Now there’s where I’m going to stop telling you what the film is.

What the film isn’t is an Alien prequel. There are what we think of as Space Jockeys in the film….but there are no Xenomorphs as we know them. There are also isn’t a Ripley character, or an expedition to make money.

This is something a little more important, this is a mission to find the meaning of life. Where we all come from, and what our purpose is.  It’s a mission into uncharted space, following what we think is a message. It’s discovery in it’s purest form.

As for the movie itself, it’s very good. Shot beautifully, with really rich colors and images. I recommend this one in 3D, not for the reach out and grab ya gags that movies still cling to, but for the sheer beauty of what it must look like. The actors in it are all amazing at their roles. Michael Fassbender plays a robot named David. David was built by the Weyland corporation, and seeing that he is not human he maintains the crew and ship while they are asleep. Michael Fassbender plays David with a child like wonder. David likes to play basketball, and loves Lawrence of Arabia. Is it because of the discovery that Peter O Toole puts into the role, is it the sweeping grandeur of the film? There is no reason, but somehow a robot connects with the character.

Charlize Theron plays the commander of the ship, and does so with a cold disconnect from the rest of the crew. The action is intense, the discovery is amazing, and the graphics don’t feel forced or pushed like they do with so many other films.

Many people are calling this a prequel….it’s not….at least not yet. It’s in that same universe, and there is a creature from that universe. Let’s call this film the DNA of the Alien story, a beginning. Not a prequel. A prequel would be like watching the apes that men evolved from. You know exactly what’s going to happen, and the path is set. No…this is even earlier. Let’s call it the drops in the water that start off the story of the Alien saga.

It’s a bit unfair to call this a prequel to the Alien saga. The story doesn’t take place on the same planet, it’s not even the same Space Jockeys. The Space Jockey from Alien was huge. These guys are big, but not as big as that original guy. 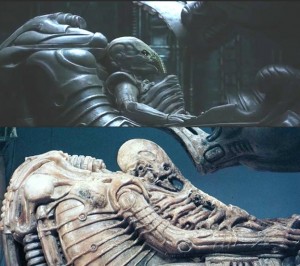 The way Prometheus talks to us is the exact way I talk to my children. I answer only the questions they ask, in a manner that they can understand. In other words, I spoon feed them a little at a time. That’s exactly what Ridley Scott is doing here. He’s giving us a little bit at a time, and in that respect, building a franchise. We all wondered who the Space Jockey was. He answered us. It was a race of aliens that were responsible for creating mankind. What we assumed from Alien was that somehow the Aliens turned on them, and they perished. We never asked the question really of what happened to them. We get a little bit of an answer.

Now if you think about what happens in the movie, the first half is about discovery, the second half is about evolution. The black mucus is a weapon that was developed by the “Engineers” and it got away from them. It was a biological weapon. To the best I can see, mankind was a mistake. It was something that wasn’t supposed to happen, yet it did. So to counter that, they created this weapon that would kill them, but I’m betting they didn’t know that it would morph into what would eventually be a mindless killing machine.

What Ridley Scott did here was answer one question. If the film does well enough (and I really hope it does) you should see two more films that finally will end up being a prequel to one of the greatest Sci-Fi films of all time. So while this one is not a prequel…it definitely sets up for a film that will be.

What did you think? Let us know in the comments below!