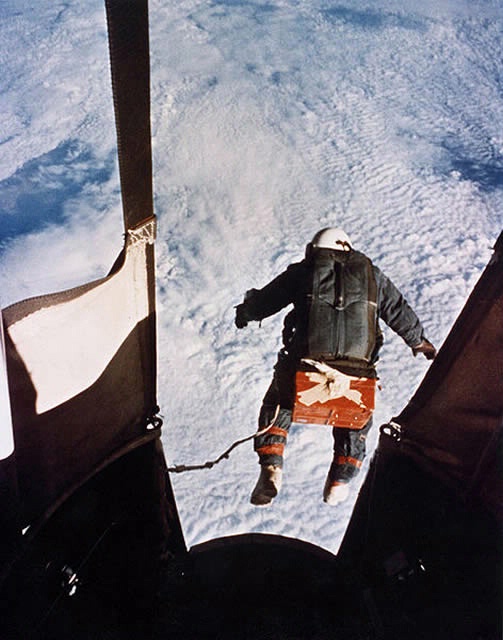 I’m not writing this so much as a history lesson, but to profess my undying hero worship for Colonel Joe Kittinger. I grew up spending my summers in and around Dayton, Ohio. It’s very much an Air Force town with Wright-Patterson Air Force Base and Museum just down the road. My dad did the news for WHIO Channel 7 for about ten years. The highlight of every years was the Dayton International Air Show. It was pretty badass, especially for a kid. Huge military planes, amazing displays, and of course legends. I met Chuck Yaeger (the first man to break the sound barrier) and Colonel Joe Kittinger. Col. Joe currently holds the record for the highest balloon jump at 102,800 feet. To give you some perspective on how high that is, most commercial jets cruise at around 30,000 feet. Colonel Joe didn’t jump out of a plane, no he’s a little more impressive than that. He jumped…out of a balloon. And to say jump is an over statement…but let’s get to that later.

Colonel Joe Kittinger is a Florida native, born in Tampa. He first entered the military in 1949. He became a pilot and began working with a series of experimental aircraft and tests. He was part of three experimental jumps to test early space suits, and to see if a high altitude bail out could happen, if things went wrong during a space flight. The first of three jumps went badly when a malfunction in the suit caused Kittinger to lose consciousness. It was an emergency chute that saved him. It didn’t stop him. He made another jump, this time from 74,700 feet. On August 16, 1960 the final jump took place. He rode up in a gondola, powered by a helium powered balloon. The entire time Kittinger was doing measurements, tests and making sure everything went right. When he got to his target altitude…he said a prayer and simply stepped off.

To stand at the doorstep to heaven, and simply take a step off, not knowing if you’ll live or die is one thing, but to do so just for the sake of science and your country is something else completely different. It takes testicular fortitude that I personally don’t posses. In addition, Col. Joe was shot down during his voluntary third tour of duty during the Vietnam War and held as a prisoner of war for 11 months in the famous “Hanoi Hilton”. He was tortured and put through “rope torture”.

After that Col. Joe enjoyed civilian life, but his legacy and his records remained. He still holds the record for  highest balloon ascent, highest parachute jump, longest drogue-fall (four minutes), and fastest speed by a human being through the atmosphere. Now someone is threatening to take his records. Felix Baumgartner is planning to break the record by jumping from 120,000 feet. Anyone else would be upset, but Col. Joe, being ever the gentleman isn’t. In fact he is serving as adviser in the whole project. The project is also not just a publicity stunt used to catch a record, but it will be used to test the next generation of full pressure space suits and to collect medical and scientific information.

Still, the best way to describe how Colonel Joe feels about the experience is in the title of his latest book. “Come up and Get Me”. It really reflects how bad ass Col. Joe is, and how much fun he seems to have in the challenge.

Read more about Colonel Joe Kittinger and his amazing life.