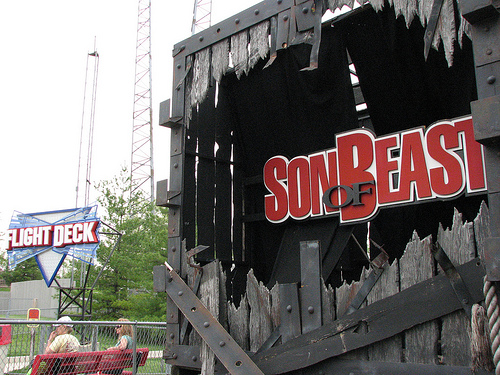 After a lengthy evaluation of all alternatives, Kings Island announced today the decision has been made to remove the Son of Beast roller coaster to make room for future park expansion.

That was the short press release we received today. It really comes as no surprise since the coaster has been closed for three long years. Still, it’s a sad day that this once mighty and feared coaster will ride it’s legend into the sunset.

The coaster opened in 2000 with seven world records. Coaster lovers flocked to it, as it was the only wooden coaster in the world that had an inverting loop. No other park, and no other maker had tried to do what Son of Beast did. However, the love would be short lived as guests would complain about the rides roughness. In 2006 the first of two major incidents happened when a bump was formed on the track. It was later determined to be a structural failure. The bump caused a train to abruptly stop, and caused 27 injuries. The ride closed, and reopened the following year with lighter trains, and no loop. It was deemed that the loop was causing the extra stress on the track.

Later in 2009 a woman claimed that she had suffered a brain injury during her ride on the coaster, though she didn’t report any injury until almost a month after her visit. The ride was closed, and though an inspection had deemed it safe, the park had decided to weigh it’s options. It was later reported that the park had spent $30 million dollars on the ride, and though they wouldn’t open it until it’s ready, they wouldn’t give up on it. It appears that day has come, and the best decision is just to let it go.

I was lucky enough to ride the coaster. This was Racheal’s (Behind the thrills owner) first trip to the park, and a birthday present for me. Racheal and I rode the coaster without the loop. We later joked that it was so damn rough that we “thought we’re going to have a brain aneurysm”, still we conquered the coaster and loved every jaw rattling moment. We even felt sad that we didn’t get to ride it with the loop. Still, it was a rough coaster, and damn intimidating.

The park has said that they will demolish the coaster for future expansion. The park’s last coaster, Diamondback, was a huge hit when it opened in 2009. It’s been three years since Kings Island built a coaster, so chances are they will put in another coaster. If the coasters could talk, would the Beast be upset that it’s only son is being removed? Chances are not. It’s the original, and when legends get competition, they get cranky. But could it be possible that the Beast will get yet another child in the future? That remains to be seen.

For more information on Kings Island, visit the official website!