Consider yourself warned.. Penn and Teller coming to Halloween Horror Nights in Orlando in 3D

Universal Orlando has already announced three houses that will be featured at this year’s Halloween Horror Nights. So far, this year’s event is set to feature AMC’s The Walking Dead, Silent Hill, and Alice Cooper – Welcome To My Nightmare. Earlier today, Universal Hollywood announced that La Llorna would be returning again and will have her own house, but the house would be different than last year’s version. However, it seems that Orlando and Hollywood are now parting ways and making the event it’s own. Consider yourself warned… 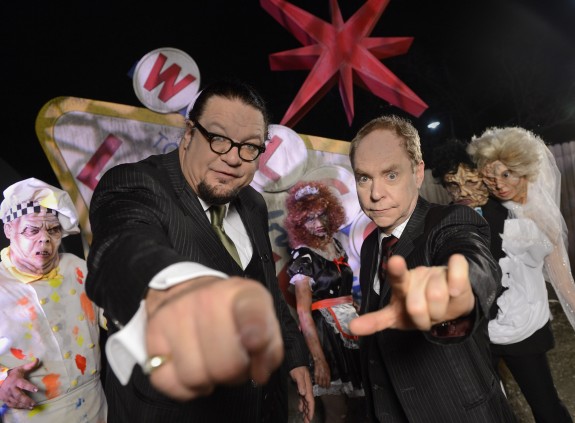 Universal and Penn and Teller have joined forces to bring their brand of mischievous magic to Universal’s Halloween Horror Nights. Universal told Orlando Sentinel the details about the house which will make it’s debut at the 22nd year of HHN. The duo has worked together for 35 years, and has had a show in Vegas-Consider Yourself Warned, for about a decade.

The two haven’t just put their name on the house, they actually worked with creative to make the house keep their personality. Penn&Teller New(kd) Las Vegas tells  follows their traditional show style of magic tricks. They do a trick that involves a nuclear warhead that goes horribly wrong.  You’ll see bits of every Las Vegas cliche used in the house from casinos, showgirls and even buffets….buffets? And the best part of it…it’s all going to be in 3D. Penn&Teller coming at you in 3D should make for some stomach turning moments of magical mishap.

Penn and Teller do more than just “magic”, though. Penn is a very well established author, and they also have their own show called “Bullshit”. Honestly, they could have a house where Penn Jillette is standing there talking and many people would be entertained for hours. The guy is very articulate in his opinions, though talking isn’t what guests come to Horror Nights for.

Penn and Teller join an already star-studded lineup with The Walking Dead, Silent Hill and Alice Cooper’s Welcome to My Nightmare, which have already been announced as houses. What do you think of this year’s line up so far? Let us know in the comments below!