Greetings…you may call me…Keeper, for I am the keeper of theme park tales. I love theme parks. But what I love even more than theme parks are small attractions. The phrase “tourist trap” comes to mind but that has negative connotations. When I say tourist trap it’s only with love and affection. I’m the Goof in The Goofy Movie dragging the Mrs and daughter from Chester’s Possum Park to the biggest ball of string while they pretend to be interested. Myrtle Beach, SC…4 hours closer, less country music, and the same type of collection of attractions. In some cases different branches of the same very attractions in Pigeon Forge.The Mrs. agreed and we find ourselves ready to head out for our first out of state family adventure in over 20 years.  We further decided that to counter the long drive after a grueling vacation schedule we will make a stop off in Savannah, GA for a night on the way home and possibly squeeze in some southern cookin’ and historical touring to cap off our adventure. The challenges for our adventure…the drive, a very short stay, no fully developed goals, and the biggest going to a beach town in peak season when I’m not even a beach goer. I suspect the girls may take a beach detour at some point while I chase down the biggest glob of silly putty or longest railroad spike or some other perceived treasure to add to my journey of adventure. The fun part on this journey is, you get to tag along too. Although reporting on everything will be impossible due to time constraints I plan on sending “postcards” of my mini-adventures so you can enjoy and discover along with us. As always, I will call em as I see em, the good and the bad along the way to give a flavor of an “away from the big boys” kinda trip. Whether the trip succeeds or fails remains to be seen but I imagine we have many adventures awaiting us, and as you know the journey to adventure is part of the fun cause….

Now I’ve already gushed about my love for the Sorcerers of theMagicKingdomover in mouseworld so it probably doesn’t come as any surprise that when I had the opportunity to squeeze in a visit to SMKs father while in MB I jumped at the chance. Father, you say, but I thought SMK was a new and unique attraction? New, to O-town perhaps, unique, welllll…some wand wheeling magi I met in my travels would argue that one with you. MagiQuest has been around far longer then its card playing sibling and with 16 locations worldwide (in addition to the US there are locations in Japan and Canada) it’s safe to say that Disney has heard of them, soooo let’s be kind and use the phrase “inspired by” as opposed it’s more litigious cousin “stolen” when referring to Disney’s version of the game. After seeing the original, I’m not quite sure the improvements Disney made actually improved on the original. 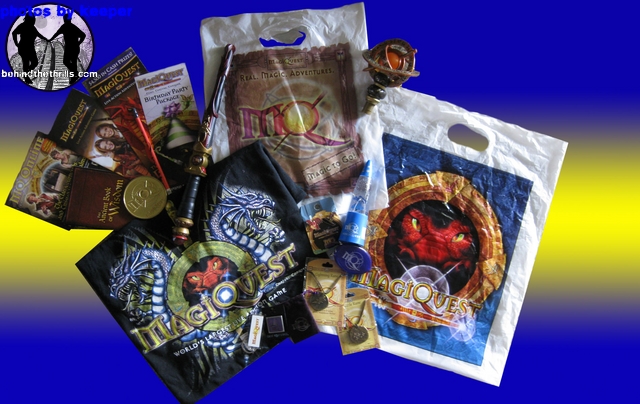 The MB MagiQuest is located in the Broadway at the Beach complex and it’s a combination of role-playing, shooting gallery, collecting, and strategy games rolled together in an immersive environment that makes you completely forget the hustle and bustle of the complex right outside. We arrived a bit before opening and shortly after were joined by a young magi with parents in tow. She was all of 7 or 8 and was dressed for battle with a MagiQuest branded pink cape and matching belt with wand safely nestled in its holster. In a word she was adorable. From her belt hung metal disc adorned with mysterious symbols. I was duly impressed by MagiQuest already and the doors hadn’t even opened. We were soon welcomed in by a magi fully dressed in suitable garb. Our young friend was a pink blur as she immediately entered the kingdom, her wand drawn, obviously already on a quest.

We were ushered in and shown our choices for wands, characters and quest time. Myself and my daughter puzzled over the selection and each picked our perfect wand for battle. Mrs. Keeper opted to stay with her camera as tool of choice to which we added a Book of Ancient Wisdom. This pocket sized guide contains close to 100 pages of clues for various quests and adventures in the kingdom and beyond, it’s the perfect admission option for those parents that just want to enjoy watching their kid enjoy the experience and costs about 1/3 to 1/4 the price of buying adventure time. We also had to pick from 6 types of characters, or clans and come up with a name for our character. Like in many role playing games, different characters have different strengths.  After our wands were charged up we were taken into a training chamber where a skilled magi showed us how to use our wands in a practice environment that did not use up any of our bought time. We were shown a stone pillar, an almost Stonehenge-like monolith in which we could chose quests and monitor our progress and given a demonstration on how it works. Once in the kingdom there are about a dozen or so of these stones that we could refer to our adventures play out. We also were instructed how to use our wands and got to practice on various objects in the training chamber. Our trainer also had help from the master magi via a screen in the front of the room. 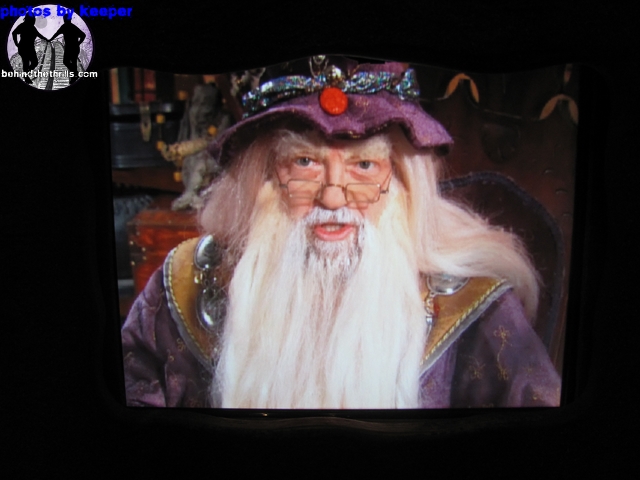 After that he opened the entry into the kingdom to us and to borrow a phrase from home, “the adventure began”. After a few minutes of scampering in opposite directions we decided to team up and both of us went on the same quest while the Mrs. chatted with guests and magi and documented our adventures with her camera. Because most of the clues were in verse they required a bit of thought, it wasn’t just a random scavenger hunt where you rush from one portal *cough* excuse me, one LOCATION to another. We found as we explored and became more familiar with the kingdom and what was where things clicked into place more quickly. We were forced to occasionally call into play Mrs. Keeper’s expertise with a particularly puzzling clue and she would take time from her picture taking to point us in the right direction. We completed 6 ½ quests before our time ran out. We were told than the average newbie only gets around 3 done so we were proud of our accomplishments. Although we were just collecting runes such as music, distraction, dazzle, etc there is an additional aspect of the game we did not experience. When you approach the stone pillars you are given the choice of quest or adventure. Our 6 accomplishments were quests and they got us to the level of “magi”. Each quest gives you a spell or rune. Once you have the proper assortment of spells you can go on an adventure. You go into a one of a half dozen special areas where there are battle stations set up and use the spells you have acquired to complete the adventure. You have to use them properly to finish each adventure. For example you might need to first use your music spell to charm a dragon before trying to battle him. As you complete more adventures and quests earn you higher ranks and gold which can be used to earn pizza and other prizes not unlike a redemption game.

The adventure continues after your time runs out and you leave the kingdom. In the gift shop are battle stations, our play package included a number of battles than can be used here. Two magi face each other from opposing panels; they use the spells they earned in the game to battle each other with their wands while two illumined pillars keep track of their strength levels. I was defeated by my daughter, since we had earned the same spells I have no defense except perhaps I was having too much fun.

The gift shop had clothing and wares for all your magical needs. Remember those metal discs hanging from the pink wizard’s belt? You can buy these physical runes representing the spells you win in the game. You can also purchase wand toppers to help personalize your wand and give it additional properties in the kingdom. There are also magical keys and compasses which interact with the game and help in the more advanced adventures. There was clothing from battle wear to t-shirts and everything in between. Even a home version of MagiQuest in which you can take your character into a virtual world and complete additional quests that contributes to your ranking. The magic that runs the kingdom stores all your adventures so when you return to ANY location, it knows how far you have progressed. This info is tied to you and can even be transfer to another wand if you chose to retire your wand or just want to have,  say …a pinker wand to match your battle wear for the day. I was in magi heaven and ended up buying a huge bag of merchandise to help me relive my time there.

If all of this wasn’t enough our Book of Ancient Wisdom alerted us to a garden quest that took place in the gardens of Broadway at the Beach. After we left to stroll around the entertainment center, at no additional charge, we could play one final quest by looking for items scattered in the common areas of the complex near the decorative gardens. It’s the perfect add on to entice an unwilling magi to not spend the entire day in the kingdom. They can still be playing as the family explores the shops, restaurants, and attraction in the complex. We spent 3 hours at MagiQuest and just scratched the surface of the many magical adventures it holds. Until I’m next able to visit a location I will keep my skills sharp by practicing online in the eternal quest for a spell that will bring this amazing attraction to Orlando. We can always use a bit more magic in our adventures.

If you want to go on your own Magic filled adventure at MagiQuest, visit the official website!