The wait is almost over for the opening of The New Fantasyland at Walt Disney World’s Magic Kingdom. The annual passholder website has announced that a special, limited entry event will be available for passholders to preview the new attractions in the long awaited New Fantasyland. While a specific date isn’t announced, a specific month is, which falls in line with what the parks have announced before as “Holiday Season 2012” for the opening date. 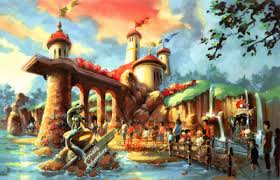 Registration details are coming soon and will be communicated via email and here on the Passholder website. Event capacity is limited, so be sure to watch for these updates! Valid Magic Kingdom Theme Park admission is required to attend this event.

November definitely makes sense for the grand opening, as some of the busiest days of the year comes in during the Holiday Season, specifically from Christmas Day until New Years Day. The preview will see the opening of “Be Our Guest” restaurant, the Beauty and the Beast themed interactive eatery, and The Little Mermaid dark ride. The remainder of Fantasyland will open in 2013 with a Princess meet and greet area, and will complete in 2014 with the Snow White Mine Train Coaster.

A more solid date should be known later this month as Disney has said they will start accepting reservations for Be Our Guest sometime in August. The big question remains, will the new area soft open sometime before November? Will it also be available during Mickey’s Very Merry Christmas Party? Very Merry is the annual Christmas event which has dates starting in early November.

However, the only way to try and gain entry into the special annual passholder event is to become an annual passholder. For more information on Annual passes, be sure to visit the official Disney Annual Passholder website.