Soldiers deserve all the respect we give them and more, simply because of the sacrifices they make for their country. No other company seems to get this more than SeaWorld. At every SeaWorld park the company has a “Here’s to the heroes” tribute somewhere in the park. It varies from park to park, but at SeaWorld Orlando they have a moment at the beginning of every One Ocean show where they ask the members of the military and their families to stand and be recognized. On top of that, SeaWorld parks gives military and their family free admission into the park as a way of saying thank you. So what better way for a family to come together after serving in the military than to be surprised at the park that honors them? 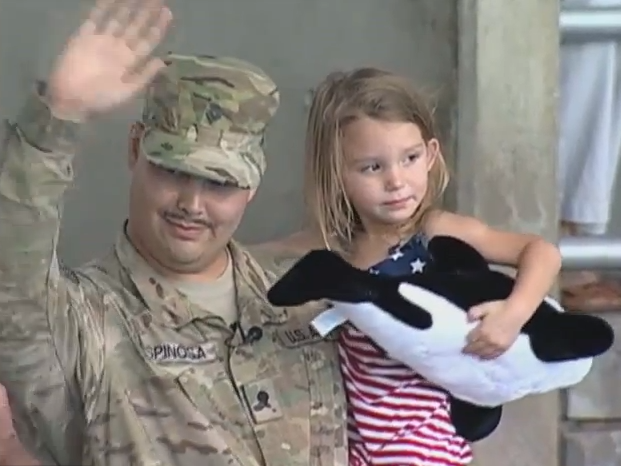 Eric Espinosa has been on duty for a year and a half  serving in Afghanistan as an Army combat engineer who was responsible for finding, defusing or activating improvised explosive devices. His daughter is a huge fan of One Ocean, SeaWorld and of course Shamu, so when four year Alexis saw the “Here’s to the Heroes” it wasn’t anything out of the ordinary, what was out of the ordinary was the surprise that she received during the salute.

SeaWorld Parks and Entertainment provides the military with free admission for active military as part of the “Here’s to the Heroes” program.

For more information about the program, and general information, visit the official SeaWorld Orlando website!

TAGSeaWorld Orlando
Previous PostClowns, Skellingtons, and authors that give you Goosebumps, Spooky Empire updates their guest list Next PostConstruction happening in all corners at Universal Studios Florida