The Art of Animation hotel at Walt Disney World in Orlando has to be one of the most hyped hotels in the history of theme park hotels. It’s a Disney hotel that is not only a value hotel, but it’s the first hotel in the Disney chain to utilize family suites instead of the traditional hotel room layout. It’s also the most heavily themed hotel on property. Honestly, even as a “Value Resort” we can’t afford to stay there, at least not until the regular rooms open up. However, we did get a chance to walk around, if only to take a look at the different areas. We also did it at night, which adds a whole new life to the resort. 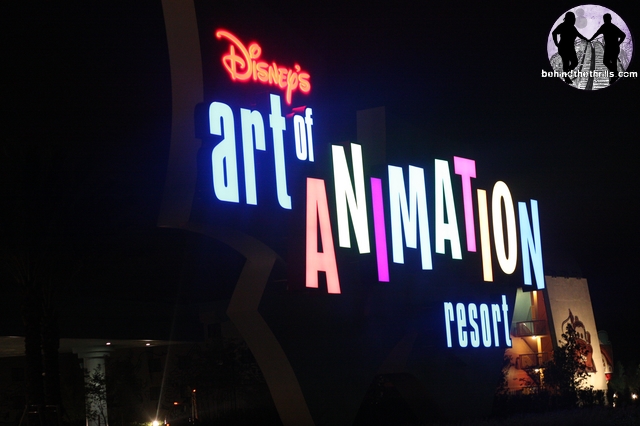 Art of Animation is probably the one hotel that you can walk around for hours and never get bored. There is just so much to look at, especially if you’re a fan of Disney animation. The hotel is split up into four different areas (three of which are currently open) based on extremely popular Disney films. Finding Nemo, Cars, The Lion King, and The Little Mermaid (yet to be opened) make up the different areas of the resort. But the adventure starts as soon as you walk into the lobby. 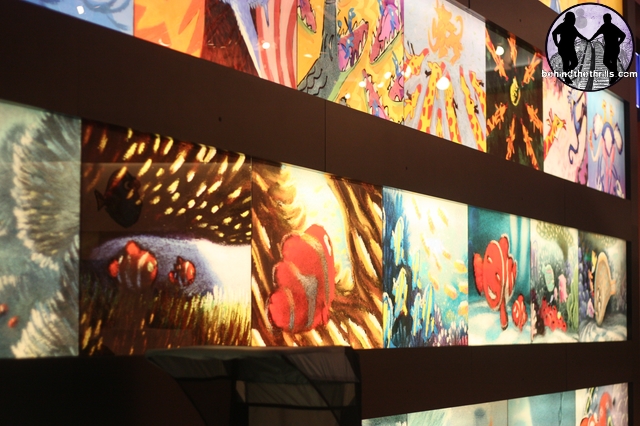 The entire lobby is just absolutely adorned with hundreds of pieces of storyboard, and concept art from the four Disney films. It gives the area a really beautiful ambiance that hints at the adventure that lays beyond the doors. 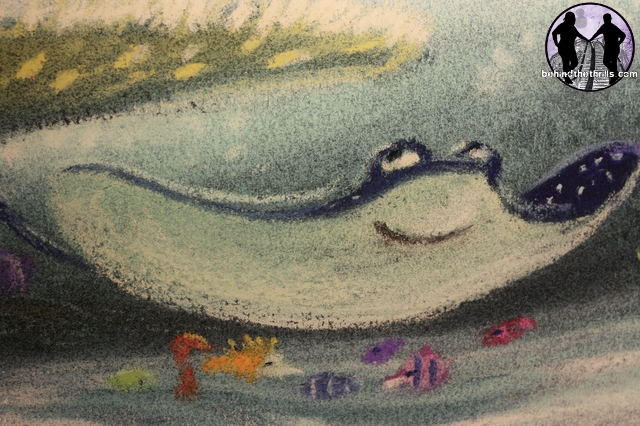 The Pixar films have a digital beauty to them all their own, but there’s just something about seeing those storyboard renderings that are truly beautiful. Other pieces include some of the early concepts for some of the characters like Ursula from the Little Mermaid, and a few different shapes of Bruce from Nemo.  Even the gift shop has tons of different items that are unique to the resort, and you won’t be able to find anywhere else on property. The dining area is unique, as it has several different areas for different types of cuisine. You can get your standard Disney fare such as hamburgers, hot dogs and chicken tenders, or go low fat and even exotic. There’s even a whole area just for desserts. 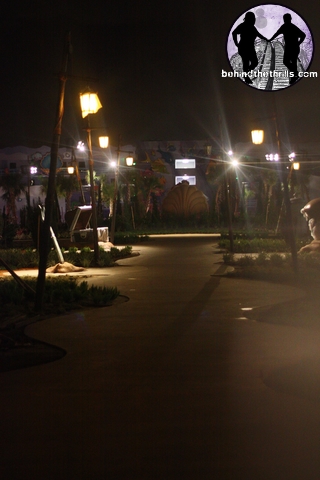 The first area we looked at was The Little Mermaid. It’s going to be the area that houses the traditional rooms, instead of the family suites. It’s still under construction, but you can get a pretty good look and get the feel for the area. It has quite a bit of the themeing from the movie, including a dinglehopper and treasure chest. It’s the furthest away from the rest of the hotel and feels quite detached. More on that later.

The first thing you see as you walk out of the lobby is the Finding Nemo area. I must say, it’s quite impressive, but there’s not a lot there. The highlight of the area is the huge pool which of course has underwater speakers, Jellyfish and of course Nemo. 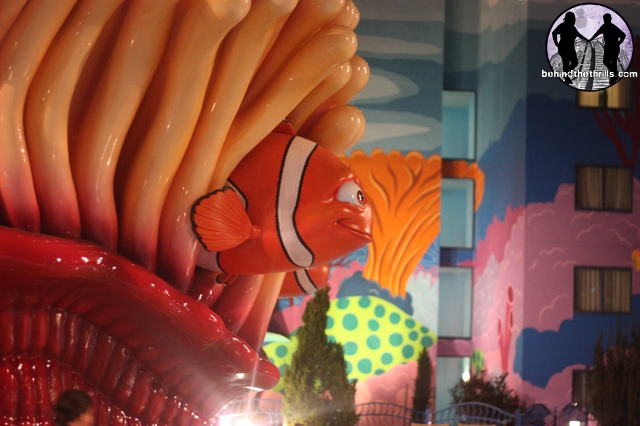 The larger than life statues of Crush and Mr. Ray guard the sides and provide for some really excellent photo opportunities. Other smaller statues of fish adorn the area, and silhouettes of Bruce,and the other sharks are scattered around the buildings. You also get a great look at the Seagulls perched on the ends of the buildings.

The Lion King area is probably one of the least impressive areas of the entire resort. It’s simple, and feels as if the least amount of attention to detail was paid here. It’s almost as if Disney included the film at the last minute. It’s effective, and works for the area, but it really feels like it’s going to be the area that kids will groan about when mom and dad say “We’re staying in Lion King!”
“But mooooooooooooooooooooooooom, I want to stay in Nemo!” 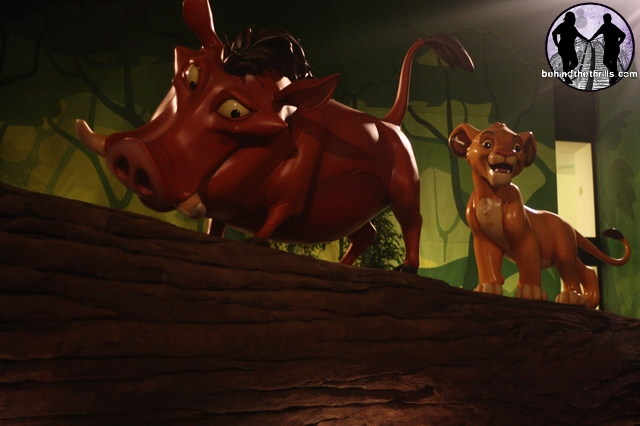 The one saving grace is the Elephant Graveyard, a sort of make shift play area. It’s cool, but feels like too little in a pretty much “darker” feeling area of a hotel that’s pretty bright and colorful. By darker, I mean mood….though there’s considerably less light. I mean an elephant graveyard while hungry hyenas watch you? Pretty dark stuff for kids…but they won’t care while they’re trying to climb on elephant tusks.

Cars is a funny, funny franchise. Gary Lasseter loved the idea of Cars. The first film was arguably the worst film in the Pixar library, and way under performed at the box office. So Disney did what every major movie studio would do…they made a sequel. The sequel, (while I liked it better..come on Michael Caine makes everything better!) also under performed, but that didn’t keep the parks from putting tons of money into a new themed land in California, and making Cars a huge part of Art of Animation. Why? Why would they do this? Because people love the merchandise. CARS merchandise is the most profitable merchandise of any other Disney chain. While I personally hate the films, when we walked into the area at the hotel…wow. I can truly see why it’s a huge hit at California Adventure. The place is just simply amazing! 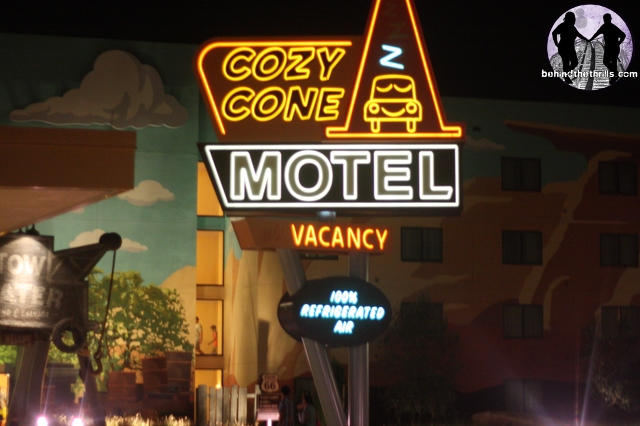 The whole area is ripped right out of the movie, and oddly, it works so much better than anything else at the resort, and probably better than anything at any of the parks. All of the movies characters are there, and while the film gave me the heebie jeebies from looking at cars with big eyes and faces, the actual models and static characters really looked cool in person. 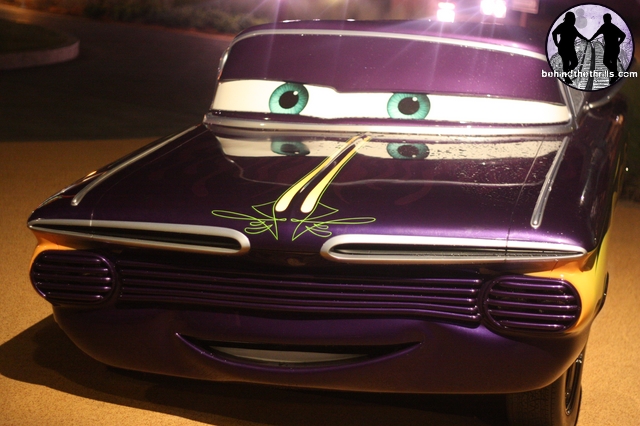 I really wanted these things to move and talk! It was so much fun just walking around the area. In fact, it was the one area of the hotel that worked best at night. 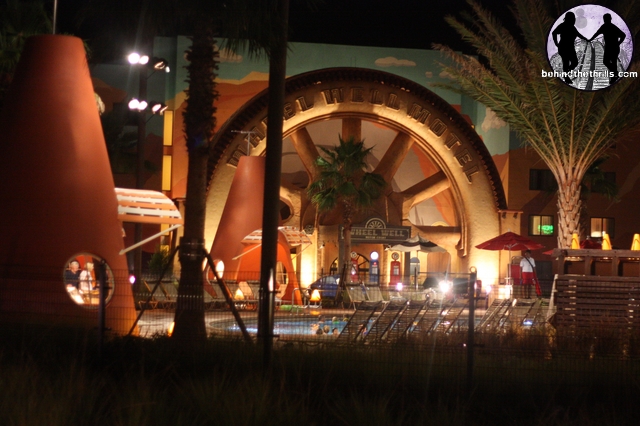 All of the characters had light up headlights, all the neon in the area lit up, and it was truly a fun experience at night more than the other areas, which work best during the day.

The hotel is a lot of fun, but it’s sole purpose is to sell merchandise. It appears that Disney chose the biggest names in their animation library to be represented, instead of going with what made them famous. Sure, those early films are represented quite well at the parks and other hotels, but to me it feels that if you’re going to do a hotel dedicated to animation, you should pay a little more attention to all of the animated “classics” instead of those that made money for you…but that’s me, I’m a bit of a purist.

Overall, the hotel is a lot of fun to visit, and I’m sure the rooms, which are all decorated to match their areas, are amazing too.
For more information about Art of Animation, visit the official website!