Greetings…you may call me…keeper, for I am the keeper of theme park tales. So the haunt season hype reached a fever pitch this past week with Universal’s reveal of the event details. Leading up to this I found myself getting less and less excited and more and more fearful that this could be the year that is my last one. Even though I thought last year was one of the top years of the event I still could not seem to get myself in the mood. Have I outgrown the event? It’s a young man’s game and after keeping pace for over 20 years I’m finding it difficult to match the speed of the 15 year olds. 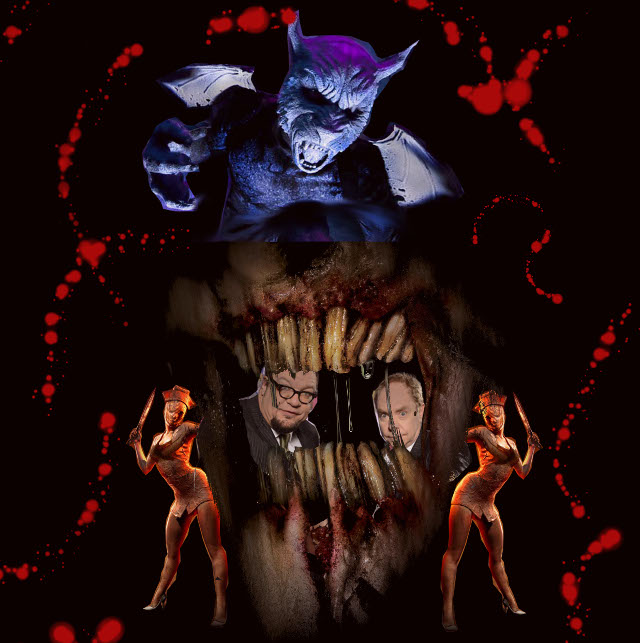 I’m finding myself avoiding the fan boards because I have lost patience with the self proclaimed experts that have been going for all of four years. I find that at this time of year I’m almost embarrassed to be considered a fan of the event because of some of the overzealous fanboys. The early news did little to change my mood. The Walking Dead…I show I never saw and have since discovered to be more soap opera and less monster tale. Silent Hill… a video game I never played and a movie that I barely remember. Alice Cooper…an act that, although entertaining, was old when I was as young as my companions. Penn and Teller…quite possibly my favorite entertainers of all time but in a house… can a house fully capture what is unique about P & T or have they just sold out for some good ‘ole product placement to join the rest of the IP parade? The rumor that Hollywoodwas running the show and there would be no icon, no overriding theme, no elaborate backstory with website to match. The loss of the Herc and Zena building and with it the hope for an 8th house. The daytime parade and construction’s impact on detail of scarezones. The more I heard the less I wanted to hear. In this age of rising prices and lowering of service has it finally gotten to the stage that it is noticeable at my beloved HHN? The masses won’t notice, they’ll still come, so why not save a few bucks, if we lose a couple old guys its just the cost of doing business.

The reveal came, 20 Penny Circus —a very entertaining act but local guys that can be gotten cheaper that perhaps some other alternatives. How about “no safe zones”…yea right. Am I gonna be fighting a werewolf for a slice of pizza at Tony’s?  Have a vampire drooling in my shotglass in the store? Have a chainsaw chick burst out of a stall in the rest room? I think not..it sounds like more, as Penn and Teller would say, marketing BS. It’s trying to polish up what they have to make it look more than it is. People asked me what I thought about the reveal, and I truly didn’t know. I felt I had become as negative as those I hate. I was doing what no one ever should- judging the event and making decisions on whether I would like it or not WITHOUT EVER ATTENDING!

Like a kid trying to find proof for Santa, I read and re-read the descriptions trying to find something, anything, just a spark, to help me believe. I kept getting drawn to the roving hoards. Sure they were trying to make lemonade outta lemons but at the core, maybe, just maybe there was something there. There was a phrase that caught my eye, a quote from Universal, something about the scare zones being ever changing and different every time you go thru and it hit me – THIS WAS EXACTLY WHAT I RANTED ABOUT LAST YEAR!—the beginning of a true new era where the show never stays the same.

I went and re-read the article (which you can…and should…read here!)

Now I’m sure I wasn’t the only one to see it, it was right there for everyone to discover but I must admit I did feel proud. Yes…change! Re-defining, breaking new ground, being leaders in the haunt game. I didn’t see it earlier because I was looking at all the surface nonsense. Like a Halloween miracle I felt my heart grow 3 sizes with re-discovered love and passion for the event.

Sure Walking Dead is a soap opera..but it’s a soap opera with zombies and powerful and iconic imagery. I may not know the depth of the world of Silent Hill but those nurses have a creepy feel to them and the movie was by no means bad. Alice Cooper just had a knock the doors down cameo in Dark Shadows and is truly timeless…..hell the man introduced Rock n Roll to Horror! Penn and Teller…ah how could I doubt for a minute that you would disappoint me after all these years…the descriptions sound like it could be the dark comedy house to end all dark comedy houses. And the less talked about step-kids… the Classic Monster house, in this 100 year celebration what better way to pay tribute to Universal’s roots. The description of Gothic and Dead End scream for soundstage experiences that will be a marvel in set design. 20 Penny Circus—what do I care if they cost more than P&T or work for free—I know for a fact it’s a solid act that will mesh well with the event and will impress the crowds. And the roving hoards? It’s been done before with varying degrees of success at different haunts, as well as HHN. All this means is that there will not be any named scare zones….but your scare zones will be there…only different! After all, isn’t that what everyone always wants? Different?

I have faith that even with incredible cost and logistical constraints that the creative team are just as much fans as we are. That they will give us things that will make it special as long as we judge this year by it’s own merits. Not compare with someone down the street or a memory from the past….just like my enjoyment will be different from my 15 year old website junkie comrade… I will knock my red drink, (whatever it’s called this year) to his Redbull as he passes me in the street and salute HHN 22 and the wonder that is the haunt season. Live for the now, my friends, the ever evolving Halloween theater of the present…and stop yer damn whining!

Instead, visit the official Universal Orlando Halloween Horror Nights Page for more information…and get your tickets…you know you wanna.