Something’s not right in the village of Carey, Ohio-investigation could lead to Universal Orlando

Universal Orlando’s Halloween Horror Nights has had a history of using the town of Carey, Ohio as a backdrop for many of it’s houses, back stories and plots. This year the house “Dead End” uses the story of an old house that is supposed to be cursed, located in the town of Carey, Ohio. Other houses used in the past include “Legendary Truth:The Wyandot Estate”, The Spawning, Leave it to Cleaver, and The Skoolhouse. Carey Ohio has been the home to Mary Agana, and the basis for many “Legendary Truth” investigations. Many thought that the investigations had stopped since 2010, but it appears that there may be another investigation starting. 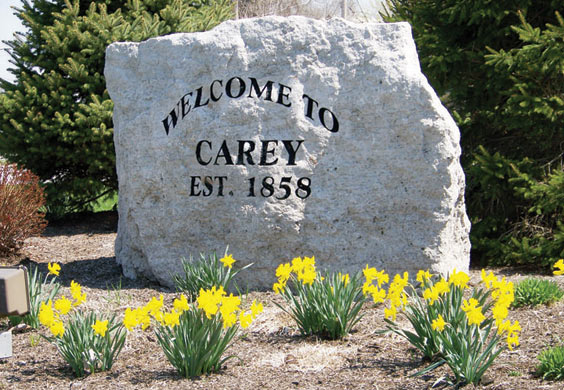 Thanks to our friends at Chainsaw Wolf we have discovered the creation of the Carey Paranormal Research Society Tumblr page.  The Tumblr page was formed just two days ago, and has been documenting some mysterious happenings. They claim that Carey has one of the “darkest histories in the United States”. The sole purpose of the Carey Paranormal Research Society is to investigate the claims of past horrors and solve the mysteries that seem to haunt the town.

Before we get into the CPRS (Carey Paranormal Research Society), let’s talk a little about Legendary Truth and Halloween Horror Nights. Back in 2005 the first online game was born. The true sleuths had to follow clues to find certain spots, dates and times to be at certain spots at Halloween Horror Nights. Their reward was a party on Halloween night that gave those who figured it out a reward. In 2008, during HHN 18 clues were once again distributed on the website and through the Legendary Truth website. Once again, those who followed all the clues were rewarded with a party on the final night, and were told the “truth” about what happened to the Skoolhouse (one of the scare zones during the event). In 2010, the Legendary Truth website went active once again…but nothing came of it, with many members of the “Collective” going missing, or being pronounced dead.

Now, two years later a new society seems to be rising. Several new blog posts relating to past investigations are rising up. The most recent being an investigation into a local house that is supposedly haunted:

Now, oddly enough, Carey Ohio is a real village in Northwest Ohio, just south of Sandusky. While there are a few mentions of random ghost sightings, there isn’t anything that says it has a dark history, or even that it’s very haunted. Outside of a few ghosts sightings, strange occurrences, maybe a few secrets….there’s nothing that sets Carey apart from any other small town in America. But maybe that’s what’s so special about it, it is a small town that can just as well be your small town.

Could we be seeing a resurgence of hidden games within the event at Orlando’s Halloween Horror Nights? While this certainly does seem like Halloween Horror Nights is gearing up for a new series of games, it’s very important to remember that things can change, and it’s also very possible that this is just an over zealous fanboy having fun. And it appears that fanboys are being very elaborate this year:

The Paranormal Research Society of Carey, Ohio monitors the internet. Of course, not the extent Legendary Truth did, but we know what is being said. It has come to our attention that people believe we may be responsible for “games” involving the Hartford Mansion. It seems true that we are not the only group interested in the Hartford mansion… there have been Rumors, anyway. It seems there will be… “games”, though we will not be hosting them. Should our investigation at the Hartford Mansion come to fruition, we will take part in these “games”, though we did not create them. Sorry to disappoint anyone; don’t hate us, please.

Oh well…that was fun for fifteen minutes. It appears that this was indeed the work of fanboys intent on taking haunt fans’ favorite ghost stories and kicking them up a few notches.

For more information about this year’s Halloween Horror Nights, including tickets, visit the official website!