Hard to believe what Legoland Florida has accomplished in such a short time. It took just 18 months for the park to open from the original announcement date. When the park opened last October, General Manager Adrien Jones announced that they were going to be expanding the park, a bold move for a park that just opened. From new sections in the park, to new stores, and then a waterpark, Legoland has kept it’s word. Just last month, the park announced a huge new addition to Miniland with Star Wars Miniland. Rumors are still flying about another new section to the park being added next year, and if that isn’t enough the park is set to start it’s Brick or Treat very soon. That’s a heck of a first year. 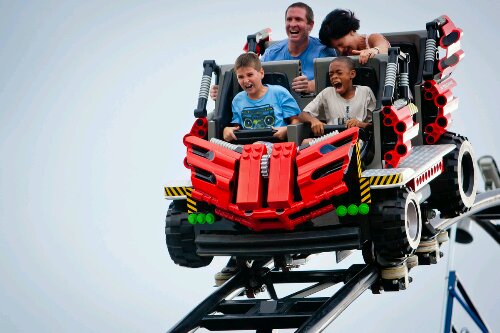 On Monday, October 15th 2012, Legoland Florida will celebrate it’s first birthday in style!  The first 5,000 guests through the gates will get free cupcakes to celebrate the occasion, and the park will have tons of other plans happening throughout the day.

The Legoland Prize Patrol will be out and about with gifts for random guests, and a bag full of fun. Some of the prize patrol gifts that will be handed out:

In addition, Legoland Florida will offer 50% off tickets for Monday the 15th only. Tickets are now on sale and are in limited quantities, so get them while you can!

Legoland Florida is Central Florida’s newest theme parks, and is designed for families with children ages 2-12. Legoland Florida showcases millions of Lego bricks with sculptures and activities, as well as rides, shows and “pink-knuckle” roller coasters.

For more information, or to purchase your tickets, visit the official Legoland Florida website!