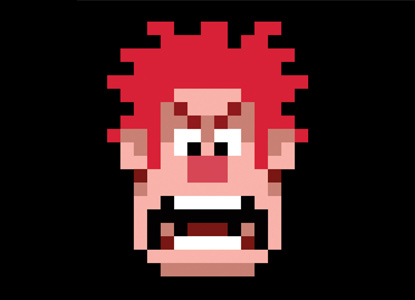 Video games hardly make for good movies, to date there hasn’t been a video game that has broken records when it makes the transition to the big screen. So when Disney decided to make the jump into video games, they didn’t choose an existing property, instead they made one up. Not only did they make one up, but they went old school with it and decided to go back to the arcade. The result? Well, we’ll save that for later.

Wreck-It Ralph tells the story of a video game bad guy named Ralph. If you haven’t seen the trailer yet, and all the classic video game bad guys, then crawl out from underneath the rock and watch it. Ralph is the bad guy in a game called “Fix-It Felix Jr.” and every time someone slides a quarter in the slot he has to smash up the building as the good guy fixes it and the collective game folk throw him off a building. Only problem is that when the game is over and the quarter is up, that’s not the end of the line for Ralph. In this world, video games are just like humans..only they’re video games. They have feelings, and social lives and really depressing back stories. Ralph is the bad guy, and in his game the game characters treat him like the bad guy he plays…only Ralph isn’t such a bad guy. Just once he wants to be the good guy and win a medal like the hero of his game, Felix. Things finally reach the breaking point when the game celebrates the 30th anniversary, and Ralph is left in the cold without a party invite. To fix this, Ralph decides to jump games and go on a search for his own medal. That’s when the cast of fun characters comes in, and as you might expect, that’s also when all hell breaks loose.

Yeah, but is it any good?

First and foremost this game speaks to the arcade generation. Classic video game characters like Qbert, Pacman and even Sonic are in abundance. The movie makes use of the games in the arcade, and each game plays a different role in the social lives of the arcade. For example, at the end of the day everyone goes down to Root Beer Tapper’s to get a few tall and frosty ones. They all go through Game Central Station to hop games, which is essentially the circuit breaker for the arcade. It’s a fantasy world, but it exists within the realms of the arcade. When a game is switched off, all the gamesfolk inside perish. That’s the biggest reason why the movie works, it adds a sense of real world danger and gives the characters a goal for wanting to have their game go on forever.
Then there’s Ralph. You really feel bad for the guy. He’s a villain in a game, but that’s not who he is. He’s just a guy who wants a friend and maybe to not feel like his job dictates who he is.
As for the actors themselves, they bring a lot to the table but the one stand out is Sarah Silverman as Venelope. She plays a character in a neighboring game called Sugar Rush. She’s the misfit and she plays it well. It brings Sarah’s smart ass attitude the forefront while keeping it kid friendly.
While the entire film has a few problems here and there, it’s a kids film that you can really get lost in. It’s a ton of fun to see how some of our favorite characters from the gaming world interact with each other, and the “Bad-a-non” meeting is just hilarious. The movie is for kids of all ages, and there are a few more intense sequences for the real little kids, it’s pretty much safe for everyone. Oh, the word fartbrain is thrown around a bit…and kids “dirty words” that some uptight parents might get upset about.

The movie is a solid Disney classic game entry, though some of the side plots kind of feel wasted and some of the characters feel over used. It’s still going to be loved, a lot. DisneyQuest, the video game theme park, is about to get really popular because not only is it a world of video games, but the world of Wreck-It Ralph comes to life. I can definitely see the movie spawning a few sequels, as has been the pattern for Disney of late.

We caught a sneak peek of the film thanks to the Disney Parks Blog, but the film opens nationwide in theaters November 2nd.
For more information, including where to buy tickets, visit the official Wreck-it Ralph website.