It’s a headline ripe for TMZ, Olympic Gold Medalist, and World Record Holder Ryan Lochte was spotted at Universal Orlando’s Halloween Horror Nights with several women. Is it a scandal? Is it his new love interests? The event is running into it’s last full weekend at Universal Studios Florida, and is already getting attention from all over the country because of the high end properties like The Walking Dead, Silent Hill and Penn&Teller making house appearances at this year’s event. 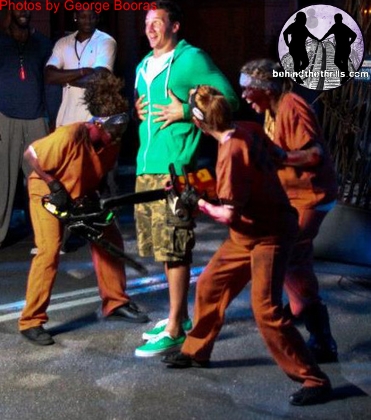 The prisoners are but one of the many “Legions of Horror” that roam the streets of Halloween Horror Nights 22. The prisoners are the first all female Chainsaw Drill Team in Halloween Horror Nights history. The Chainsaw Drill Team is a long standing tradition at the event, and this year’s team proves that girls can be just as mean with the blades as the guys can.

Ryan is just one of the many celebs that have been spotted at this year’s event, proving that you never know just who you’ll run into.