The Parent’s Guide to Halloween-What part of Horror do you not understand?How to know if your child is ready for haunt season

Halloween is one of the best times of the year for many of us. In some parts of the country, leaves are changing colors, and the weather is cooling off. It also means that for theme park fans there’s one last run of theme park thrills before the end of the season and the end of theme park fun for the winter (unless of course you live in Florida, but for giggles we’re going to pretend we don’t) and one last chance to get your fix. Many theme parks offer Halloween events aimed at different audiences. While some provide sweet treats, and are for families, there are some aimed at the twisted, and demented souls who roam the earth. We call them, lovingly, Haunt Freaks. Each season, however, more parents try to mix the two as they drag their kids (sometimes kicking and screaming) into these scarier events. Why? Maybe they have no babysitter, maybe they think their kids can handle it…the end result is always the same, tears and therapy. So, to help you decide if your kids are able to handle it, here’s a quick guide to Halloween scares, from one parent to another. 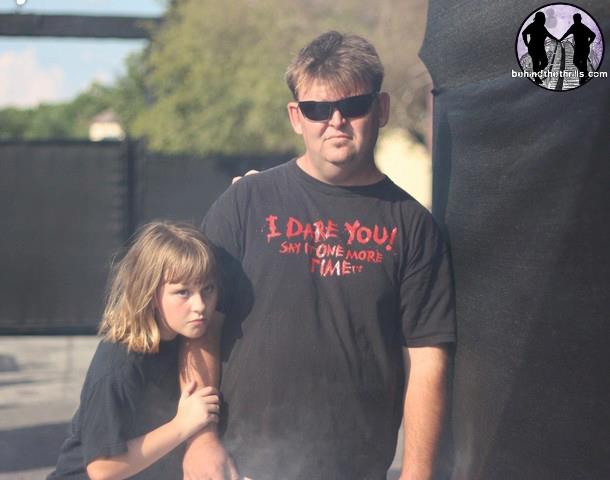 The first thing that should clue you in about an event is the name. Events that have names like “spooktacular”, “spooky”, “creepy”, “not so scary”, “trick or treat” and other family inviting words are usually kid friendly. They tend to be aimed at families with kids ages 2-12, and very mild on the thrills. Then you have the other event…you know, the events with words in the title like “Horror” “Terror” “Fright” “Scream” and my personal favorite “nightmare”. If you think these are family friendly, and it’s okay to take the little ones to it…what part of Horror do you not understand?

By definition, horror is used to describe something that is terrible, frightening, scary and nightmarish. It should be a warning sign that screams “DO NOT BRING YOUR KIDS!”. Still, parents do, and instead of giggling screams of delight, we see tears and angry parents.
Storytime-Last week we took our 11 year old daughter to Halloween Horror Nights at Universal Orlando. She had been looking forward to it for a month, and though we warned her that it was going to be scary…she still insisted on going. We did not think twice about it, more on that later. While we were there we saw more than one family with kids in full blown tearful meltdowns. The kids were terrified beyond belief, and the actors were not letting up…too much. The parents were behaving in a variety of ways. One parent was yelling at the already scared kid to shut up, they didn’t want to hear it. Another parent was yelling at the actors to “LAY OFF MAN, CAN’T YOU SEE MY KID IS SCARED!”
Yes, they can see it. As a parent we have a choice to make…either take our kids and suffer the consequences or make the sacrifice and not go. What you decide to do is ultimately your choice, but know that there is no special treatment at a scary event and there will be no letting up. You brought your kid, deal with it.

I know what you’re thinking, sounds pretty hypocritical doesn’t it? I took my 11 year old, and I’m sitting here telling you not to take yours. The truth is, this is my daughters third year of Halloween Horror Nights. The first was when she was seven. The first year, she begged my ex wife and I to take her. Reluctantly I gave in…but I set up rules with my wife and made sure that the little one knew it. For that instance, we would go in, take a look around. If she didn’t like it, her and I would leave, and my wife and son could stay (if they wanted). Three steps in and my daughter got attacked by a chainsaw gang. That was it, she was done. We did manage to find an escape route and see a few shows, and that was the bright spot to an otherwise dismal evening.  Fast forward three years to 2011, and the little one is once again pining for the chance to visit Halloween Horror Nights. Here we are a year later, and she asked to go back again. So what’s the difference? Time.

Our little ones see us having so much fun at these events. We talk about it all the time, and we are off doing something they can’t do. It’s always been said, the quickest way to get someone to do something is to tell them not to do it. The same holds true with haunt season. You constantly tell your kids no, which makes them want to go even more! However, you have to make judgement calls and gradually test the waters to see if they are ready.

So how can you tell? Every kid is different, and every kid reacts to different situations in different ways. Here’s how I was able to judge when my little one was ready.

These are just a few signs that I’ve noticed raising two kids throughout the years. As I said, each one is different, and each one reacts in different ways. The biggest thing to remember is that haunt season, (whether it be Halloween Horror Nights, your local neighborhood haunt, or just popping around the corner and saying boo) is supposed to be fun for everyone. No one wants to see their children get so scared that they never want to do a haunt again. You want them to be able to enjoy the same things you do, and have a better time as a family.