Be an official member of the Orlando Polar Bear Club at Gaylord Palms’ ICE!

The Polar Bear Club has a long history of crazy guys braving very cold temperatures to jump in freezing water and act like, well, Polar Bears. It’s a tradition that dates back over 100 years to Coney Island and the basic belief was that a brief dip in very cold water could not only boost one’s speed to get back into warm clothes, but it could also boost stamina, virility and immunity. It’s with that thought in mind that Gaylord Palms has been named the official meeting spot of the Orlando Polar Bear Club. The only problem, it doesn’t exactly get cold in Orlando. 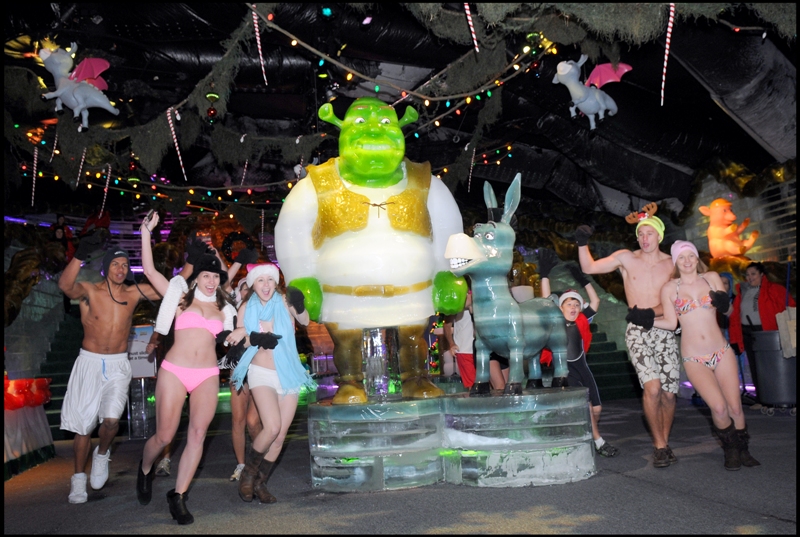 ICE! at Gaylord Palms Hotel is a chilly walk through 2 million tons of ice that tell a story. This year, it’s Dreamwork’s Merry Madagascar that gets the frozen treatment. It’s also Merry Madagascar that will be the place for the Orlando Polar Bears to make their official “plunge”. Since there is no water cold enough, participants are invited to come out to Gaylord Palms and take a leisurely stroll through the 9 degree ICE! exhibit and even slide down the ice slides…in your bathing suit.

The fun starts at 7:30 a.m. at Gaylord Palms and will include a “warm up” party after the plunge with hot cocoa, where participants will be officially inducted into the Orlando chapter of the Polar Bear Club. The Club has been doing this since 2008, and since the club does a lot of charity work, Gaylord Palms will be donating a portion of the proceeds to a local charity.

For more information, including tickets, be sure to visit the official Gaylord Palms Polar Bear Club page!

You’ll shoot your eye out! A Christmas Story coming to Gaylord Palms ICE!