It’s been teased about for weeks now on the official Disney Parks Blog. Dragons at Magic Kingdom. There apparently was a Dragon hatched a long time ago at the Magic Kingdom, but it’s never been seen. Pictures have surfaced of a hatching site, and even footprints have been seen around the castle. There was a blurry picture and interviews with villains. What is this mysterious dragon, and where can we expect to see it? It seems that we have the answer. 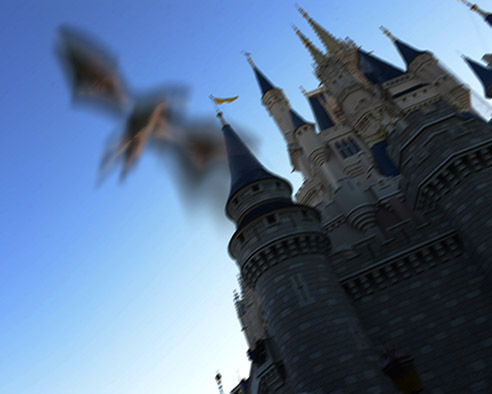 A disney fan was able to get “footage” of a dragon flying over the sky.

It’s not great footage, and you can really see nothing more than noise from what seems to be an ultralight.

In the night sky one of our readers, Adrienne Withers saw something flying over Walt Disney World and gives a better description of what she saw:

We were traveling down World Drive and pulled over into the Hess Gas station and watched turn toward Studios then go to EPCOT parking lot/staging area. The orange of the wings were clearly seen, but the body was dim. You could see the chute and the fan-driven motor and you could hear it quite plainly.It was 2:30-3’00 AM and we had a great time following it with the car. You could see more with the naked eye than the camera could pick up.

That matches what was seen a few months back in the skies over California, a dragon, flying through the sky, (click here for original story).