The great thing about Magic Kingdom is that you never really know what characters you’re going to see in the parks. I remember a time when you could see the likes of Baloo and the gang from TaleSpin, Darkwing Duck and Launchpad and even Marsupalami. Those characters are rare to see in most Disney parks these days, as Pixar characters, Pirates and princesses tend to dominate the landscape. Magic Kingdom has tons of characters that you haven’t seen in years! Starting January  21st, guests will be able to see some of the even older characters that haven’t been around in decades! It’s all part of “Limited Time Magic” and it’s just for one week only! 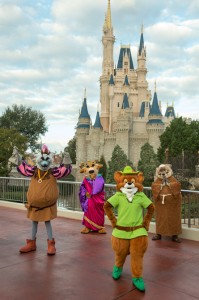 According to the official Disney Parks Blog, beginning January 21st, guests will be able to see some of their favorite Long Lost Disney pals. Robin Hood, and the gang will be hanging around. You might even see The Three Little Pigs, Clarabelle Cow and Horace Horsecollar hanging about. Plus, knowing Disney, there will be some hidden surprises. So what is the one character that you’d most like to see a return?

Personally we hope Disney does an impromptu parade with all the old characters in tow!