“I should like to save the Shire, if I could – though there have been times when I thought the inhabitants too stupid and dull for words, and have felt that an earthquake or an invasion of dragons might be good for them. But I don’t feel like that now. I feel that as long as the Shire lies behind, safe and comfortable, I shall find wandering more bearable: I shall know that somewhere there is a firm foothold, even if my feet cannot stand there again.”

What if your feet could stand in the shire? What if you could see the free realms of Middle Earth? If rumors are true, persistent as they be, the time will come soon when Hobbits will shape the fortune of us all. 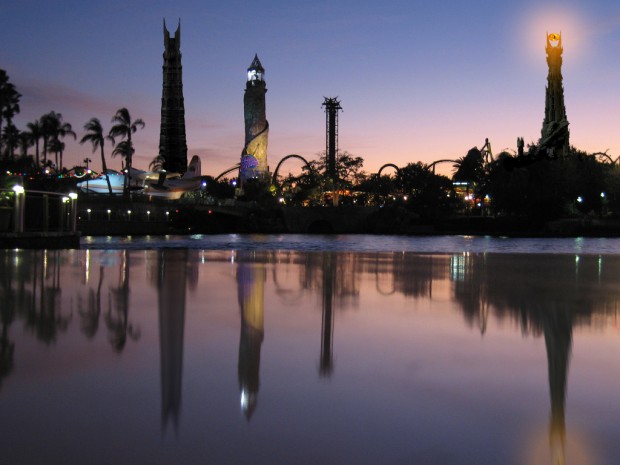 According to a brief posting on MiceChat Universal has purchased the theme park rights from Warner Brothers and the Tolkien Estate to bring the world of The Lord of the Rings and The Hobbit to life. The rumor, which has been around since 2006, says that Universal will bring the world of Tolkien’s Middle Earth to life in all of it’s theme parks, with of course Orlando being the first and eventually spreading out to the rest of the world. We must stress that nothing is concrete here, and all of this is rumor until an official announcement is made.

Could Lord of the Rings come to Universal? Yes, it could, but there are so many obstacles in the way with the biggest problem being the juggernaut that is already there…Harry Potter. The area consists of Wizards and dragons and goblins and magic. Much of the same subject matter is littered throughout the books and films of Lord of the Rings and the Hobbit. The two lands could appear very similar in scope and theme, and could confuse guests a bit about which land is which. The other big problem, of course, is the Tolkien estate. It’s been said time and time again that the Tolkiens have been adamant about not having a theme park. In fact, many have wished that Disney would take the reigns of a Lord of the Rings theme park…but Tolkien himself was reported to HATE Walt Disney and wanted Walt to have nothing to do with his books at all. So what changed? In short…Harry Potter.

Universal developed a great working relationship with Warner Brothers during the creation of the Wizarding World of Harry Potter. New Line was the studio that made The Lord of the Rings trilogy, but when it came time to make the Hobbit films, those went ultimately to Warner Brothers. New Line had some experience with Universal before from Halloween Horror Nights. In 2007 the film studio and theme park combined to bring the worlds of New Lines three biggest characters, Freddy, Jason and Leatherface to the event. The partnership was successful and the event was huge. Fast forward to the opening of The Wizarding World and the huge success. Now fast forward to the success of The Hobbit:An Unexpected Journey. With the partnership that Universal has with Warner Brothers, Universal asked WB to speak with the Tolkiens about a new land. Apparently JK Rowling also went to the Tolkiens with her bank statement, and the Tolkiens started to think twice about declaring never to have a theme park.

Still, the question persists…Why? Why would Universal want to add a themed area that is so similar to Harry Potter, especially when the park still has more Harry Potter areas to build, plus a huge expansion in Florida? The answer came by way of a mouse, and a lightsaber. In late 2012 Disney acquired Lucasfilm. That would give them the rights to use Star Wars, Indiana Jones and all of the Lucasfilm library in their theme parks. Disney also owns Marvel, which they could use in all of the Disney parks worldwide…except for Florida. Universal had an existing deal with Marvel before the Marvel/Disney buyout which prevents Disney from building anything Marvel related East of the Mississippi River. Still, that leaves Disney to build Marvel and Star Wars theme parks all over the world. Plus, there’s the ever hanging question of James Cameron’s Avatar. Plans have been announced to include the Avatar films in an all new land in all Disney theme parks…of course that was announced almost two years ago now, and no progress has been made visibly.

With the realms of Middle Earth under their belt, Universal could command not only the same types of audience as Harry Potter, but also the older, geekier audiences that flock to the Lord of the Rings series. Also, unlike Harry Potter, there are at least two more Hobbit films in the pike, with rumors of the Prequel to all of it “The Similarion” being turned into a huge series of films as well. Then you also have the vast world of the Tolkien books. While JK Rowling did an amazing job with the Harry Potter books, and created a huge world…the realms of Middle Earth are a thousand times bigger and there’s much more that Universal could draw from.

Where could it all go?

With the exception of Japan and Singapore, most Universal parks were built in the middle of huge cities. Space is extremely limited in both Florida and even more so in California. With the Florida park being the flagship park, and the park to most likely get Middle Earth first, it’s best to look at this area, and try to figure out space. The obvious area would be Marvel Superhero Island. Disney has the rights to Marvel, and according to the contract, Universal has to give Disney a pretty good sized chunk. It might do the park well to get rid of the area altogether and convert it. There are several rides already in existence, most notably The Incredible Hulk Coaster and Doctor Doom’s FearFall. The Incredible Hulk Coaster could be converted into a Lonely Mountain coaster (or something similar) while the twin drop towers of Dr. Doom could be converted into…what else? The Two Towers. The surrounding area with Spiderman, and Toon Lagoon could also be converted into several different areas of Middle Earth.

The next obvious area would be the existing Lost Continent, which happens to be right next to The Wizarding World of Harry Potter. While Harry Potter took most of the Lost Continent, it has been reduced to a small stretch with just one attraction and two eateries. While it would be logical that it would go, it may not be wise to put two such uniquely themed areas so close together. The other alternatives have Universal’s Employee parking moving elsewhere, since that area takes a HUGE amount of space behind the parks, it could be better fitted to a parking garage and the parking lot could be made into Middle Earth. Other ideas have the area expanding into a third gate for Orlando, which there is certainly enough ideas to make that happen..though the land would be the issue once again.

The next big thing would be what rides would be in this new area? After all, The Wizarding World has a huge technological marvel with Harry Potter and the Forbidden Journey, a mix between motion simulator and dark ride. It’s possible that Universal could make a Hobbit ride which would take guests through Bag End and the Shire and on an Adventure. Again, the world of Middle Earth is so huge. The worlds could include The Shire (naturally). The Shire is a grassy hilly place full of farms and Hobbit holes, big trees and pubs. Then you have Rivendale, the home to the elves. These are more cliff and river based areas, full of marble columns and great stone halls. Then there’s the home of the Dwarfs..usually mines and castles carved into mountains. Of course you also have the kingdom of men, which include great woody castles, huge fortresses of stone and great amounts of horses and swords. A third gate could incorporate all of these areas in separate lands. An area would have to pick one of the areas, most likely The Shire and take guests through the different worlds via a ride. Then there’s the vast cast of characters. Dwarfs, Hobbits, Elves, Wizards, dragons, trolls, orcs, goblins, and the menacing Uruk-Hai. And no land would be complete without the great lords, the Giant Golden Eagles.

If these rumors hold true, Universal certainly has a huge amount on their plate to play with, and an even larger job of getting things right. If the rumors are true, don’t expect to see any kind of announcement until after the Wizarding World of Harry Potter expansion gets announced, and close to being finished.

So what would you like to see happen? What would you build in the world of Middle Earth if it were to become a theme park? Let us know in the comments below!

To see what Universal can do with fictional worlds, and bringing the written word to life, be sure to check out The Wizarding World of Harry Potter.

Visit the official website for more information on the Wizarding World, including tickets!