Penguins, ice, adventure! In Chicago? In anticipation for the huge adventure that will be hitting SeaWorld Orlando this year, seven cities across the nation will get a taste of Antarctica. SeaWorld will take a slice of the adventure from Antarctica and bring it to cities starting today! Guests will be able to see a bit of Antarctica, win prizes and more! In addition, SeaWorld has launched an all new mobile app, and an all new sweepstakes! 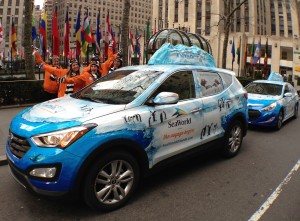 SeaWorld wrapped Hyundai SUV’s will be able to be spotted all over town, and guests will be able to experience a huge dome of ice filled with shareable photo ops, virtual reality games, and the chance to win great prizes by playing Antarctica themed games.

“Since Antarctica: Empire of the Penguin was announced in November 2011, we’ve been planning and looking forward to bringing a glimpse of the attraction to these key markets to connect with our fans and let them feel the chill,” said Vice President of Marketing & Sales for SeaWorld Parks & Resorts Orlando Toni Caracciolo.

Coca-Cola is an official sponsor of the event, and will provide Coke Freestyle Machines for complimentary drinks. If you can’t make it to one of the cities, you can still get in on all the adventure with the “Family Voyage” Sweepstakes!

Enter to win several prizes, including a trip to SeaWorld to be the first to experience Antarctica!

For more information about Antarctica, coming this Spring to SeaWorld Orlando, visit the official website!