Keeper’s Tales:BEHOLD! The freaks and oddities of world long forgotten wait for you right behind this curtain!

Greetings…you may call me…keeper…for I am the keeper of theme park tales. Unlike last year’s visit to the Fair(click here to gain ten pounds just from reading about the gooey fried goodness), this year my visit to the Florida State Fair was not in search of calorie-laden treats to get myself sick but treats of a different type. Treats for the imagination, for those that still believe anything is possible. It was to take a trip back in time to visit an almost forgotten ancestor of our modern theme park. Well back before Uncle Walt sat bored on a bench alongside a merry-go-round thinking of a better amusement park. Before our carnivals evolved into fairs, our fairs to amusement parks and our amusement parks to theme parks we had side shows. 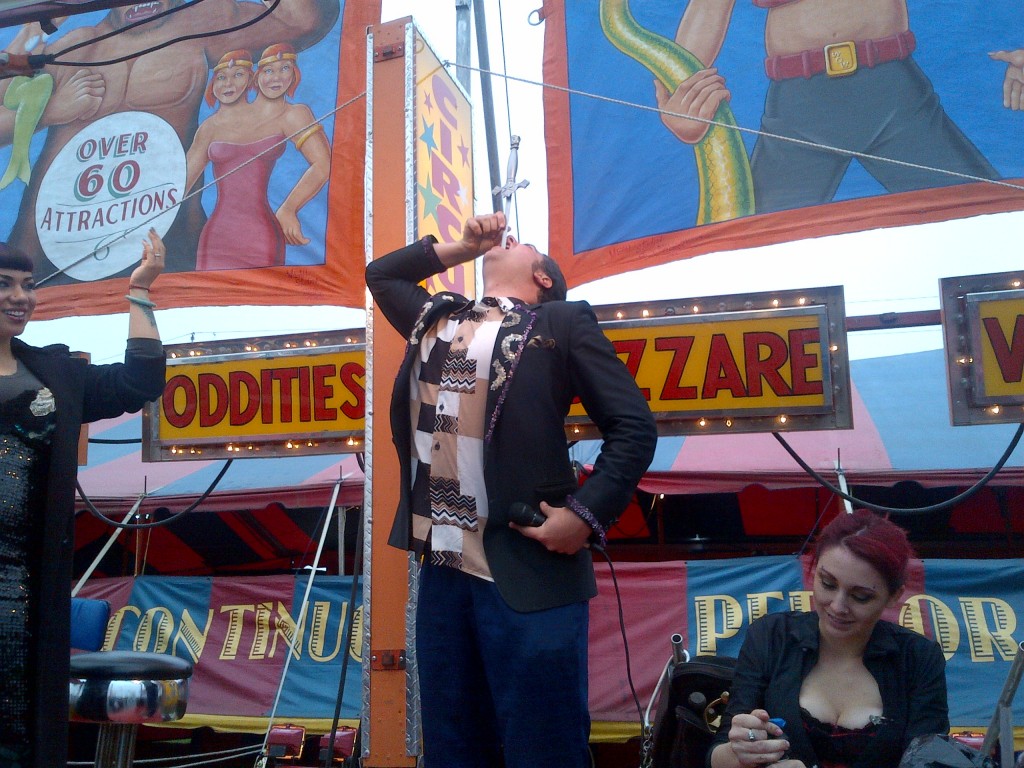 Exhibits of living human oddities are recorded in circuses, fairs and taverns in Europe as far back as the 1600’s and by the turn of the century had discovered the new world. Think back to that time, obviously there were no X-Box or internet, but this was before TV, and most other forms of home-based entertainment. Radio, although around, wasn’t a common fixture in most homes till the 1920’s. If our hard-working ancestors wanted an adventure they had to venture outside the home for it. Sideshows cropped up in various forms during this time. The circus side show was a separate pre-show to the circus in which you paid a separate admission to see the wonders under the tent. This type of sideshow was also referred to as the 10-in-1 because you got to see 10 (or more) acts under one tent. At their peak there were over 100 traveling 10-in1’s that traveled the country with circuses, fairs and carnivals. 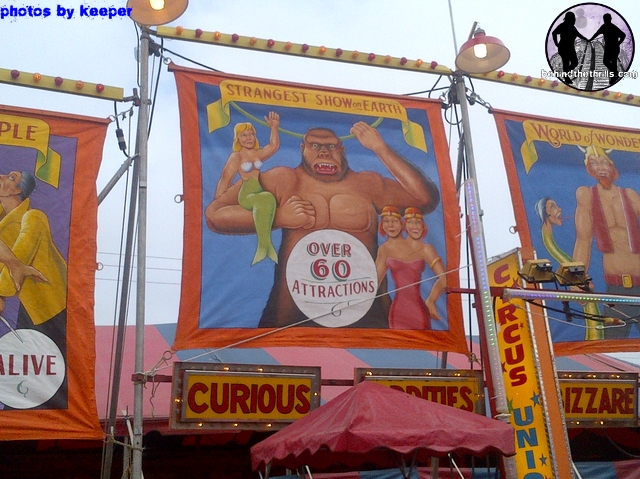 A common part of this presentation was the “blow off” where the guests are offered for and additional charge to “walk behind the scenes” to see the workings of some amazing set piece like the inside of a blade box where a girl is contorted around numerous blades without getting hurt. Another version of sideshow happened in dime museums around the same time. Those were more static displays along the like of preserved 2 headed goats or Barnum’s amazing Fiji Mermaid that took up more permanent residence as museums of the unusual. Occasionally a dime museum would add a human oddity for a limited time to increase attendance but for the most part dime museums sideshows were a smaller taste of the 10-in-1 with only the need for occasional dusting. It’s a fascinating subject that we are just hitting the high-points on today but there are many sites that explore this history that a simple Google search will reveal. To this spinner of tales, it’s important because our American side show has roots in history, theater, and marketing. Once you know the tale you can walk through any of our high-tech wonders in our theme parks today and see how these ancestors influenced them. 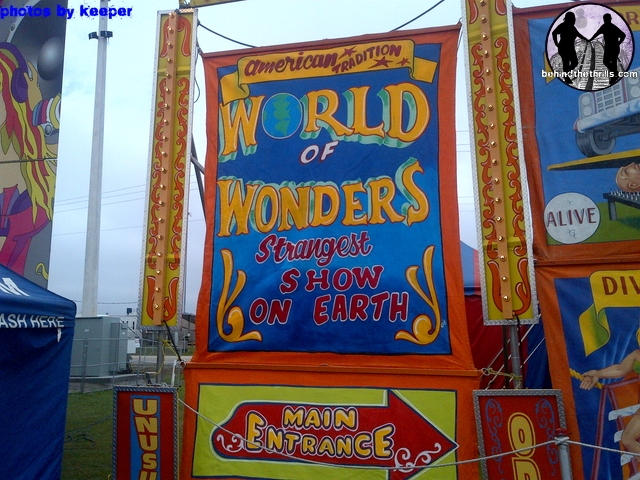 The high-point of the Florida State Fair for me is the annual visit of the one remaining traveling 10-in-1 left in the country. Right smack-dab in a midway with rides that were unheard of in the 1900’s is an entertainment time-machine that will, for a few minutes, take you back to another time and place. A simpler time when some silver in your pocket and a little imagination, could take you away on an adventure that would stay with you long afterwards. 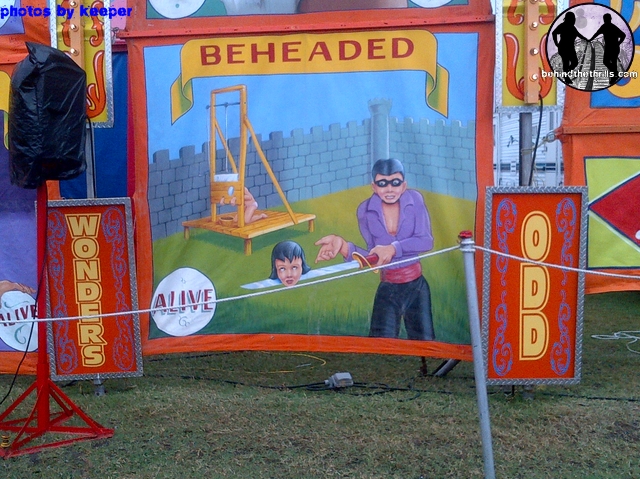 Mrs Keeper and I braved the growing din and golden-fried distractions of the midway until we found it. The breeze blew the colorful banners promising all manner of wonders beyond imagination. We heard the barker out front charm the crowd with the lure of what was inside. He teased them with bits of what we’d see inside. He told us that the regular price was $5 and the sign in front that said $3 was a leftover promotion from yesterday BUT for us, his friends, he’d do something crazy…something special. We could see ALL the acts advertised for only TWO DOLLARS. The crowd hurried forward and me…well, to borrow a phrase, he had me at “step right up”. We entered under a canvas flap and into an area covered in sawdust surrounded on 3 sides by stages and left 2013 behind completely for 45 minutes of magic. It was all there, 2 headed calf, blockhead, headless woman, electric woman, blade box, half- man, fire eater, our senses were bombarded non-stop as the acts came rapid-fire from every direction one after another. I studied the early morning crowd that joined me, old and young, laughing and smiling together, cheering at the right spots, ohhing, ahhing, sharing a moment of discovery, a reminder of a simpler less complicated time. We experienced theater as a group, for almost a full hour, we stopped texting, updating our statuses, worrying about our schedules, and looking at our watches as we were led down the well-trod path that our ancestors had made for us. A path that is rarely used now a days but for now still leads…for those that will follow…and remember.

And now ladies and gentlemen, readers of all ages. I invite you to step right up, just a little closer and see the amazing wonder of freakdom that we lay here before you. Never in your days have you seen the oddities that lay right behind that curtain. Step in just a little closer, but don’t crowd! I have something right here that will dazzle the senses and bewilder the mind…what is the cost you might ask? For you…YES YOU! I offer you this glimpse into a freakish and frightening world…just click the box below and see the amazement that awaits you: