Construction gets heavy at Universal Orlando as Transformers readies for opening

Universal Orlando is on a building frenzy. The resort is setting records for the amount of projects going on at once, and even more for the time they are taking to complete those projects. While the light at the end of the tunnel is still a ways off, it is still visible. The resort has several major projects going on round the clock, and many of which during operating hours for all to see. This week we take a walk around the entire resort and look at all the projects we find. From Transformers, Simpsons, and even the possibility of a boy wizard, Universal is trying their best to keep guests flooding the gates at both parks, and CityWalk.

Take a walk with us as we do a walking tour of all the construction going on at Universal in this all new video. We look at just about every project. Then scroll down as we look a little deeper. 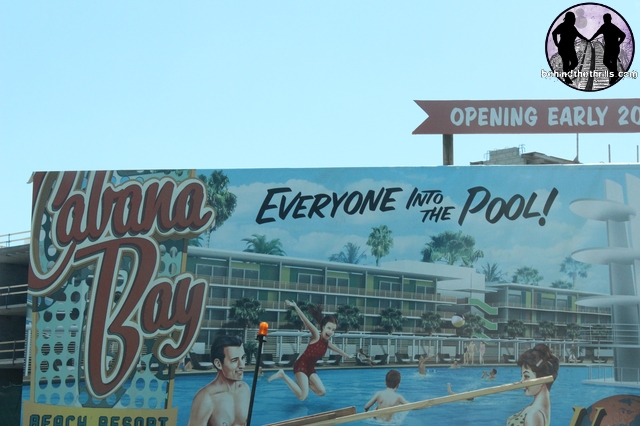 Cabana Bay Beach Resort is the all new hotel being built directly across the street from Universal’s Islands of Adventure. The hotel is on a break neck pace to get open in the Spring of 2014. This week the park placed signs all around the property that gives a better idea of the feeling they’re going for with this new resort. We clearly see a separation from the other hotels, as this one has a definite more relaxed look where the other three hotels give off a feeling of being more luxurious. Cabana Bay Beach, while sure to be elegant in it’s own way, is going to be more along the lines of a family hotel that you can find just off of the Interstate. 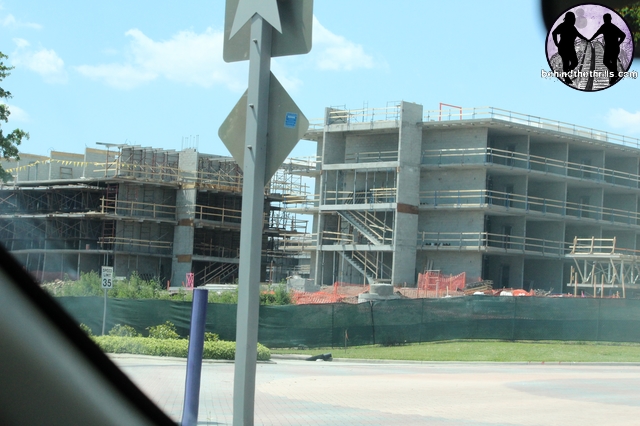 Instead of enclosed hallways and huge buildings, the standard outdoor walkways that you find in many Disney Value resorts can be seen. While the rooms are sure to be nice, it seems that the emphasis is being taken away from the room experience and putting it more on the experience outside of the room. The hotel is scheduled to have two pool areas, and a full bowling alley, just to name a few of the more unique experiences. 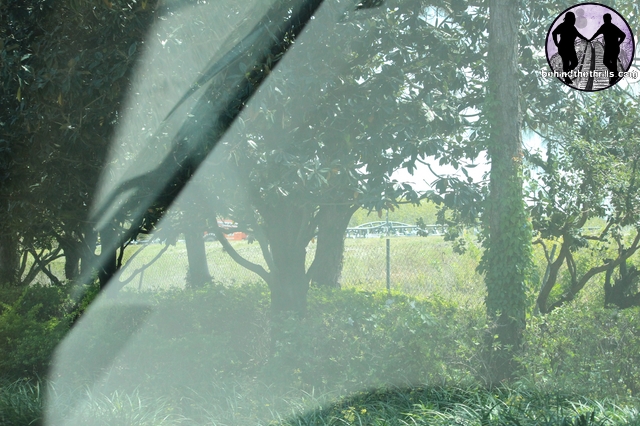 Just on the other side of the hotel construction, in an open field, we just happened to spy some coaster track. This track matches the track that has been seen inside the show building currently being assembled in the former Amity area. While it’s not been confirmed, many rumors suggest that it will be for the all new Wizarding World of Harry Potter Expansion in which we will see a Gringott’s Bank coaster. It looks as if the coaster isn’t quite complete.

Over at Universal Studios, several projects are starting to morph and take on a very definitive shape. While nothing has been confirmed by the park, it appears that we are definitely starting to see some of the restaurants found in the world of the Simpsons. 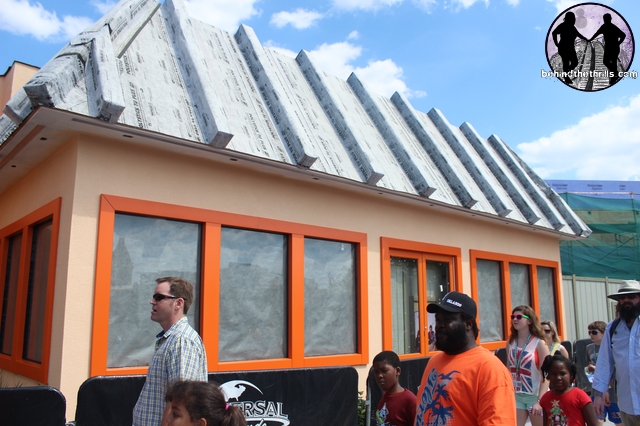 What we can only suspect is Krusty Burger is starting to get some very loud colors and even more work done around the structures. 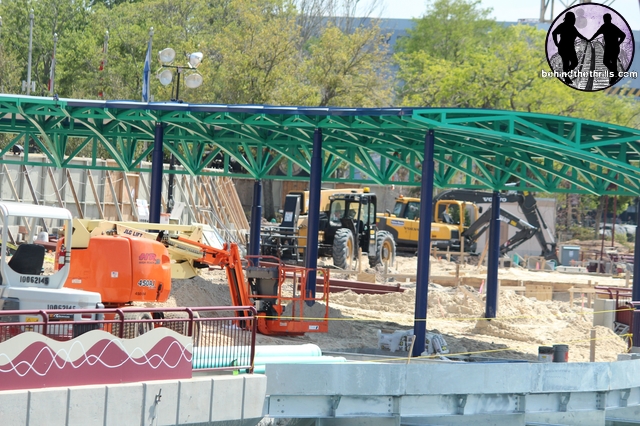 Work closer to the Lagoon side of the area shows off what looks to be some new attractions. It’s been rumored that this will be a flat ride themed to aliens in the Simpsons, though with the area being used it could be a tad more. 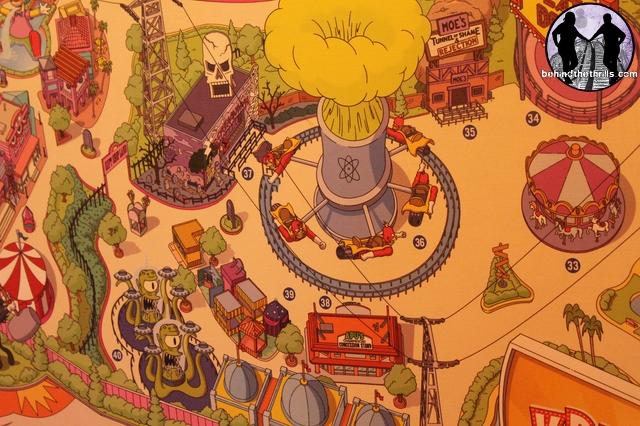 While unlikely, the answer could very well be in the Queue for the Simpsons ride. A mural in the queue shows off several attractions, including the Alien ride. The area seems just about large enough for a few more smaller rides as well, with the giant cooling towers being the main attraction. Again, unlikely, but a very fun theory if it holds to be true.

In the former Amity Area work is speeding along like crazy. The rumors are flying that what we are seeing is the beginning of the all new London Side of the Wizarding World. The front of the area near the water will be all facades of some of the big landmarks in the book. 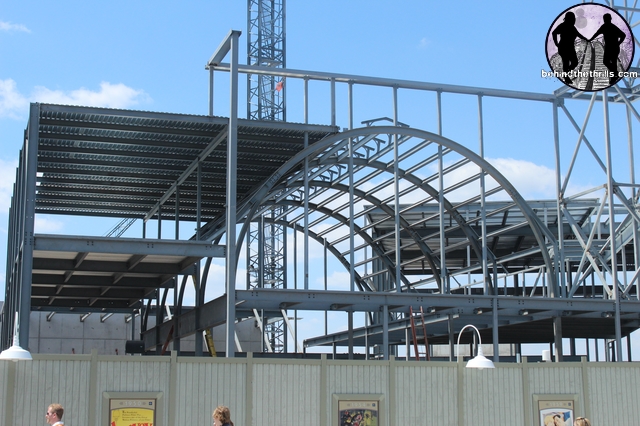 Kings Cross Station, 12 Grimmauld Place and the Leaky Cauldron could all be some of the new fronts being installed. We should know in a few short weeks as crews prepare the area, but for now all we have is a bunch of steel…which is still quite amazing, considering that just over a year ago this was all the sleepy little town of Amity. 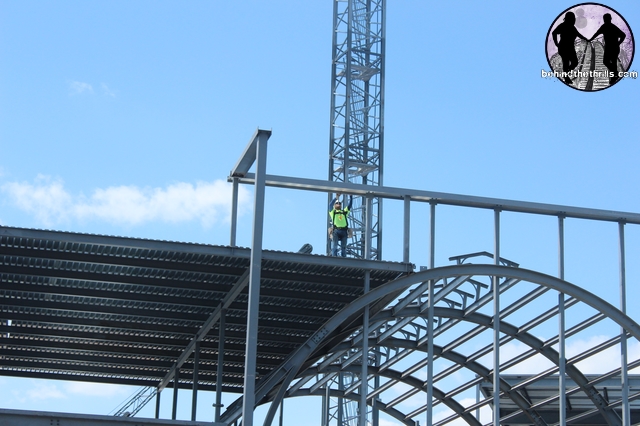 While most of the cranes are gone, they have been replaced with huge steel structures and lots of workers visibly working on the area. Besides Gringott’s Bank we could be seeing Diagon Alley which will be completely hidden from the “Muggle World” by all of the London landmarks. 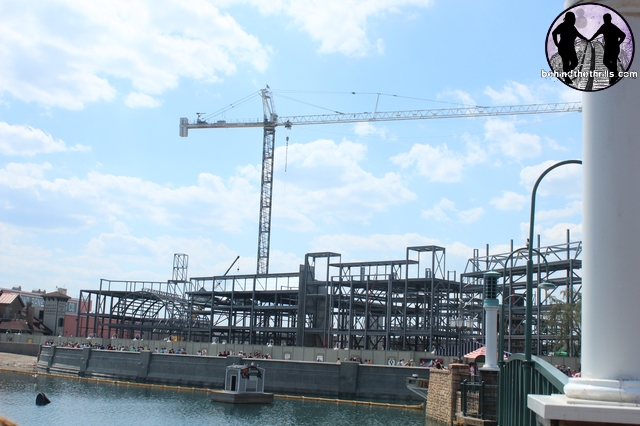 From the other side of the water, you get a better look at the structures going up, and can start to tell where the buildings will go. If we had to guess, we would say that if the rumors are true Grimmauld Place will be the structure in between the two end pieces. How amazing will that be? You see Muggles pouring into the Leaky Cauldron, and then pouring out of another area with the Wizarding World hidden as it should be!

Walking across the way to Islands of Adventure we see some projects as they finish. In Citywalk, in between NBA City and Islands of Adventure a wall had gone up. While it was hopeful to wish for a new small venue, what the park ended up putting in was something just as valuable. 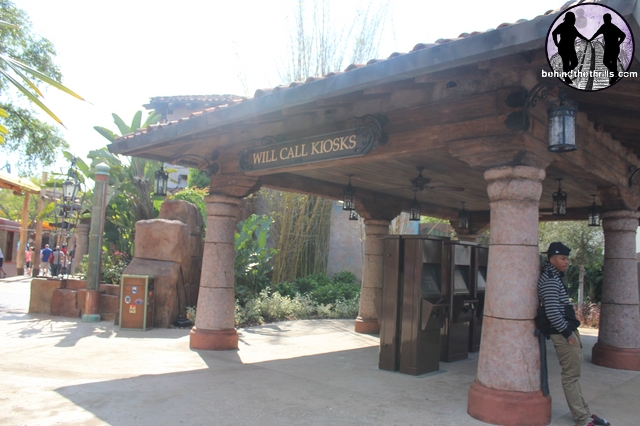 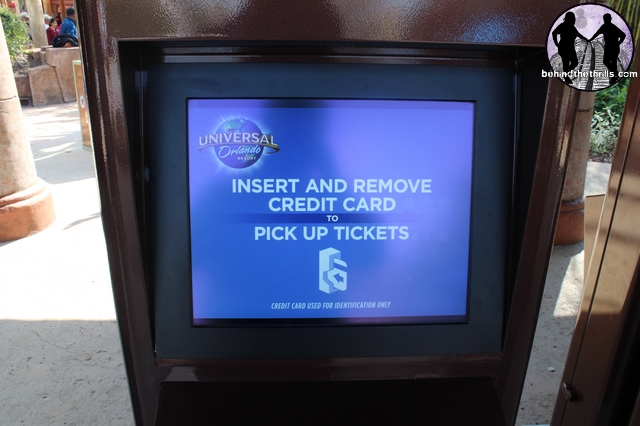 All new touch screen will call kiosks just to the left of the main ticket window will help those with prepaid tickets avoid waiting in long lines just to get into the park. 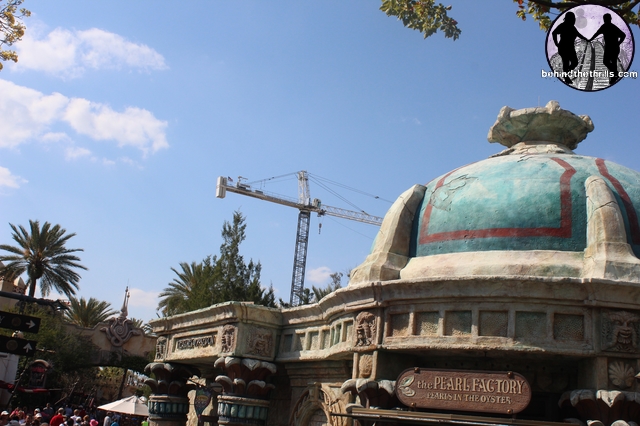 Over at Islands of Adventure, the cranes have shifted from Universal Studios Florida to right behind Dragon Challenge. 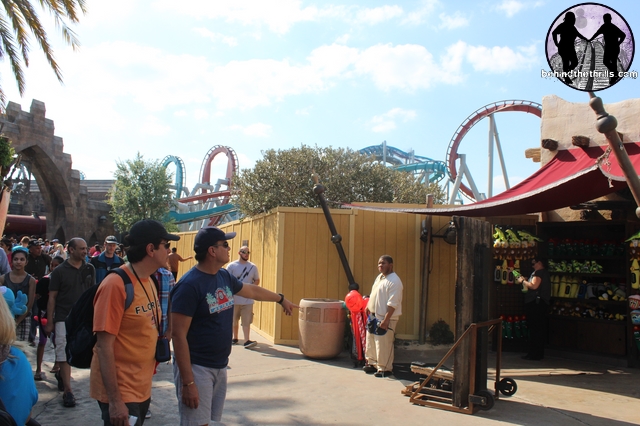 Walls have gone up from the Lost Continent area all the way to the Wizarding World. Work is being done under the Dragon Challenge coasters to make way for a train station. The Hogwarts Express will be chugging along between both parks, from what the rumors say. 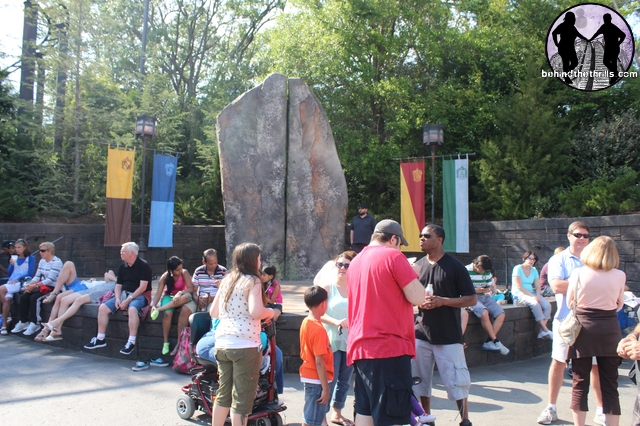 While this isn’t exactly new, it’s new to us. A stage has been constructed to house the Triwizard Pep Rally as well as the choir of frogs. The stage is a smaller, but it gets the show elevated so that more guests can see the performances without a crushing crowd of people behind them.

More around the parks:

Back over at Universal Studios, Transformers is getting ready to open. While it’s not going to be “any day now” we have heard that they are getting rather close. Team members are starting to be hired, and new merchandise is going up every day it seems. 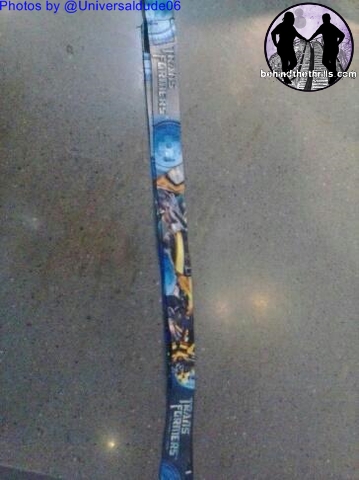 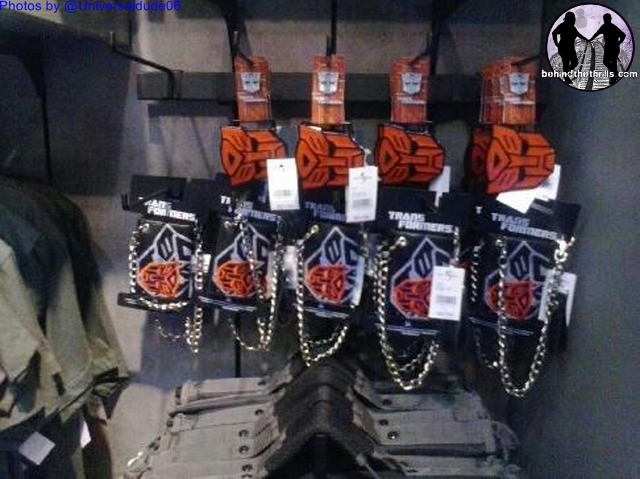 Lanyards, wallets and belt buckles are just some of the new merchandise hitting shelves at The Supply Vault. 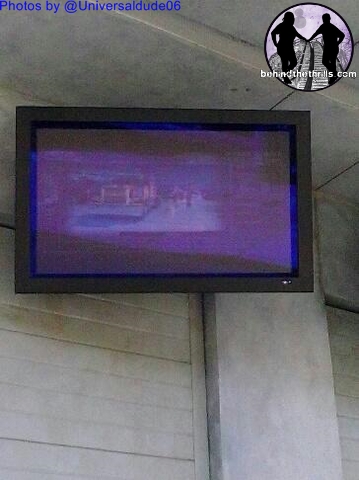 Outside the building, near the outdoor queue, monitors have gone up and are starting to cycle through the video that will play. It’s the same video that plays in both Hollywood and Singapore, but it is a good sign that progress is being made. 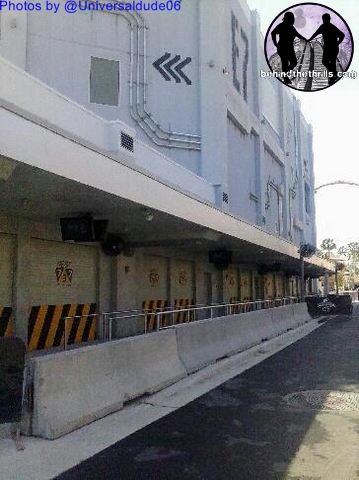 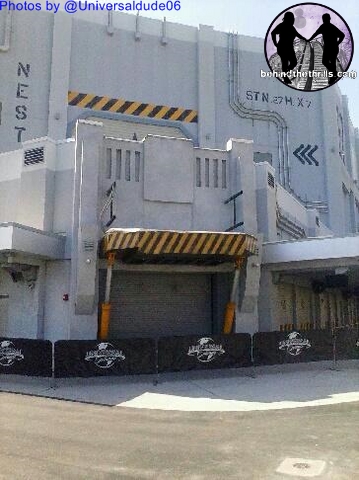 All around the building walls are coming down. You can see where the ride entrance will be, as well as where the queue area will be. The park has taken the whole area from an unused soundstage, to rubble and now a fully constructed attraction in less than a year. While we aren’t sure what’s left to be done with the ride and inside of the building, it’s very likely that it will be the fastest that any park has gone through a complete demolition and rebuild. A definite date for the opening has not been announced, but Summer is the only official time frame as of now.

It’s definitely a very exciting time to visit Universal Orlando, and we hear that more great things are on the way. This year alone could see the opening of two very huge areas and attractions with Transformers and the Simpsons area. Next year will see the grand opening of Cabana Bay Beach Resort, and quite possibly a Wizarding World of Harry Potter expansion. Stay tuned as we continue to venture through the park!