On Friday SeaWorld Parks and Entertainment went public on the New York Stock Exchange. The stock opened at over $30.00 dollars a share, and earned the company about $700 million dollars. If you’re Blackstone, the owners of SeaWorld Parks and Entertainment, you’re ecstatic…until you find out who bought your stock. On Monday, PETA, the ever shocking group of “animal rights activists” who are always trying to do something to damage the reputation of SeaWorld and get them to release all of the animals back into the wild, announced that they have purchased a “significant amount” of SeaWorld stock and enough common stock to give the group the right to attend annual shareholder meetings, as well as submit shareholder resolutions. Does this mean trouble for SeaWorld or is this another tactic of PETA’s seemingly attention starved cries for attention? 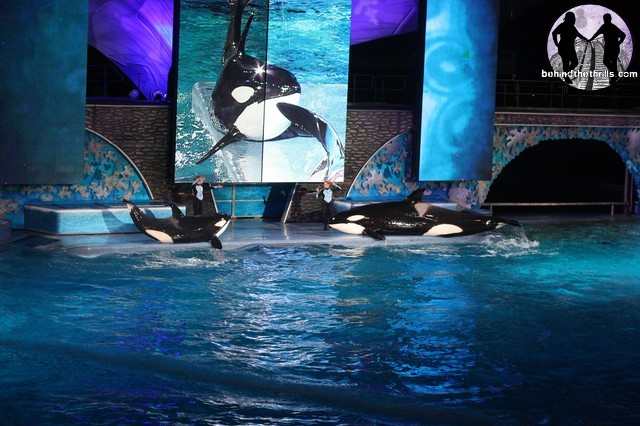 PETA-The People for the Ethical Treatment of Animals, has launched all kinds of silly actions towards SeaWorld. From protesting the park, to demanding that the whales and sea life be set free, to putting in a bid price (reportedly so low it was laughed off the table) to most recently trying to sue for “slavery violations”. The group has been trying to gain attention by combating the theme park chain for quite some time.

Why? Maybe it’s for attention, but we think it’s to take the heat off of their own scandals (like this one!), but whatever it’s for it certainly gets people looking and talking.

In the latest stunt, the group has announced that they have purchased enough stock in the park to attend meetings, and even submit shareholder solutions. While this surely had a few people crapping in their fish tanks, it boils down to just being another stunt. While we here at Behind The Thrills are no experts in stocks, bonds or the stock exchange, we do know how to read…and we definitely know how to smell bullcrap when it approaches.

PETA wrote on their official blog (sorry you’ll have to find that craziness for yourself) that “We will educate stockholders about how marine parks tear orcas and dolphins away from their homes and families and imprison them in minuscule concrete tanks, where they suffer from captivity-induced stress and illness.”

“Our first order of business as part owners of SeaWorld?,” wrote Michelle Kretzer on the group’s blog. “Getting the orcas out—including Corky, who has been enslaved by SeaWorld for 44 years”.

Well, first let’s look at those statements. SeaWorld hasn’t bought an animal for years. Most of the parks now use breeding programs to populate the parks. The animals are born in captivity, cared for in captivity and given their food. Plain simple fact? If you were to release the animals, they would die. All the animals in SeaWorld Parks are given more medical care then a lot of kindergartners get.

Of course, when it comes to caring for animals, PETA has been accused of not helping but neglecting the animals. Stray dogs and cats are allegedly not safe when it comes to PETA, but an Orca? Yeah, of course they know what’s best.

Second, let’s look at the education and environmental aspects of SeaWorld Parks. The park raises more awareness about not only marine life, but also domestic animals as well. The last big attraction at SeaWorld Orlando, Turtle Trek, teaches guests to be aware of the world around us, and how we can make a difference. It’s a sentiment that is growing in all of the attractions coming to SeaWorld parks around the country.

Now what about this share business? While it stands true that the group will be able to attend meetings and bring resolutions to the table, they won’t have the immediate power they are hoping for.

There are tons of regulations and rules in place, and they differ by company. However, this article best explains how most resolutions work (click here).

In a nutshell it says that the shareholder can bring a resolution to the table, and it can then be voted on, if it’s desired. If PETA wants to bring a vote to the table to release all whales, they can do so….but equally as so, the rest of the shareholders can call PETA names, shout obscenities and ignore them. If you think PETA is going to go before the board every time and ask for resolutions like setting the whales free and bringing pictures of dead animals in, well..they can…but it’s not that simple. They have to first put it in writing, usually one per annual meeting, and have it approved by a committee. So while it stands to reason that PETA will cause a ruckus at the annual shareholder meetings, and you may see some naked celebrities throwing themselves on Wall Street…it’s very unlikely that PETA will be able to do much more than protest at the shareholder meetings. For anything more, PETA would have to be the majority shareholder (own more than 51% of the stocks)…and while the group would love to do that, it’s not very likely.