Antarctica shines at SeaWorld Orlando as part of Summer Nights

Antarctica at SeaWorld Orlando is the biggest investment in a single area in the park’s history. The all new attraction takes guests to the bottom of the world without ever leaving the heat of Central Florida. While the day sees long lines and great ice sculptures, the night offers something a little different. During Summer Nights guests can enjoy a little bit of a different look at Antarctica. 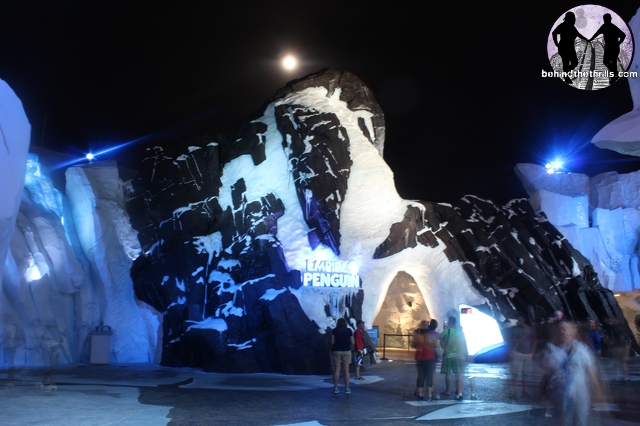 The all new Antarctica at SeaWorld Orlando is a sight to behold in the regular daytime hours. With tons of towering ice formations, icicles, and penguins hidden in the rocks, the area is a great place to get lost in. At night, however, the lighting not only shines on the ice, but through it, giving the area a look of a real ice drift in Antarctica. 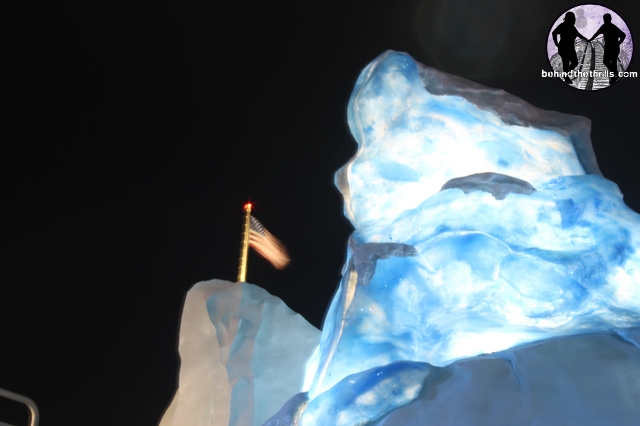 Glowing ice formations, shining glacial drifts and moonlit icicles can all be seen after dark in Antarctica. The attraction has become a huge hit, and has become a huge part of Summer Nights, the summer night time celebration at SeaWorld Orlando. 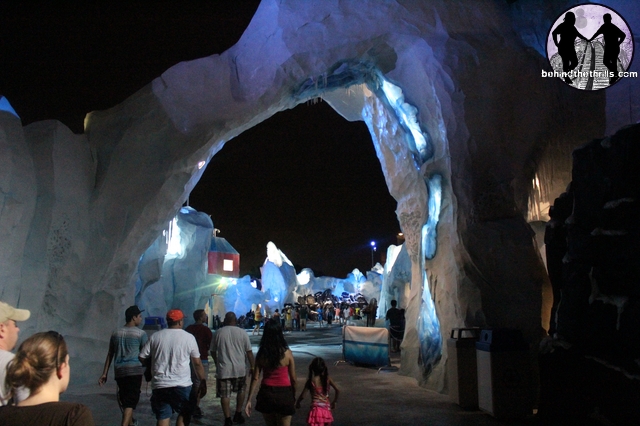 It’s not enough to just see the area at night, you have to actually walk through it to get a good perspective of what you’re missing. Take a night time stroll with us at night! 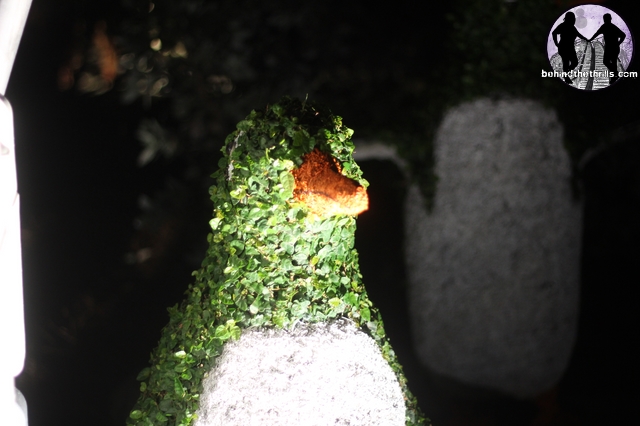 In addition to the amazing adventure of taking on Antarctica at night, the realm has also been changing quite a bit through the weeks since the attraction made it’s grand opening. Topiary penguins have made an appearance at the front of the new attraction.The other thing that is mysteriously absent is the “South Pole” that made the debut during the grand opening weekend. We are told that the pole is going through some changes, and will be back better than ever. 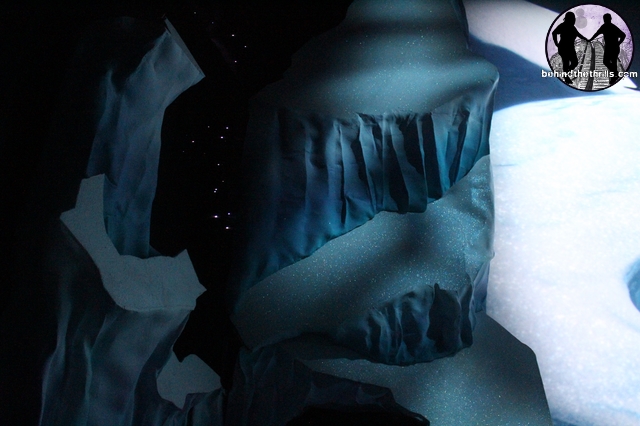 While we liked the whole experience in our first review of the attraction, the one thing that we felt the ride itself needed was a little bit of a fill in. The entire ride, at first seemed a little bare. Granted, Antarctica isn’t exactly a brimming metropolis, but the ride did feel rather like a warehouse…at first. Like the ever shifting nature of the land itself, however, Antarctica the realm is going through changes as well. The ride has been tweaked a bit, and is making more movements overall. Plus, the entire scenery of the ride has changed. 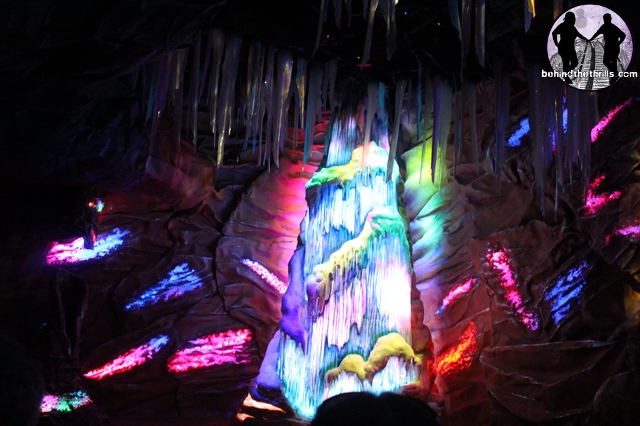 The ride also felt a lot more colorful and whimsical.  More glowing cave, and frozen waterfall action is always a good thing. If you had ridden the ride a few weeks back, as we did, you’ll be surprised at the amount that has changed within the ride itself, which only adds to the richness of the realm experience. 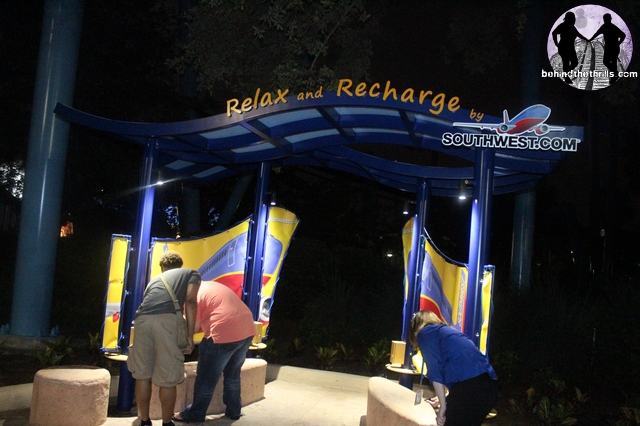 Antarctica isn’t the only place where changes are happening. As guests walk past Manta towards Atlantis, a Southwest Airlines sponsored “Rest and Recharge” station has also been added. 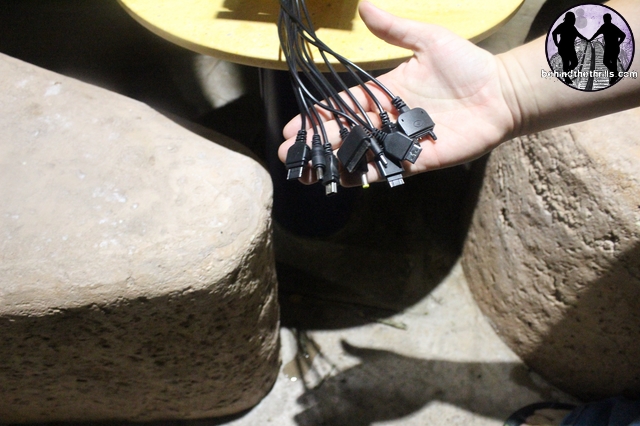 The area is for guests to take a seat and recharge their portable electronic devices, and includes a variety of plugin adapters. Disney has clearly started something with their highly touted “Rapunzel” area which offers guests a place to plug in their cameras and cell phones. It’s a growing trend in society to have tons of electronics, and to share tons of pictures and information through Twitter and Facebook as it happens. The biggest problem is that it often times depletes your battery. Instead of ignoring the trend, or pretending it doesn’t exist, SeaWorld is proactive and encourage everyone to share every bit of their time at SeaWorld Orlando without fear of killing your battery.

Check out even more pictures of Antarctica, and the rest of SeaWorld Orlando at night!

Summer Nights at  SeaWorld Orlando happens every night until August 14th, but if you can’t make it before then, don’t fret! Antarctica will be glowing every night that the park is open late! However, because it is constantly changing, it may not be the same experience twice, so see it often.