Are you ready Freedom Fighters? You’ve been preparing for battle for just over a year, and now the time has come. It’s time for battle! Optimus Prime, Bumblebee and N.E.S.T. are counting on you to protect the All-Spark against the evil Decepticons. Fate rarely calls upon us at a moment of our choosing, and ready or not, that moment is now. Fear not freedom fighters, we’ve been through battle and we are here to guide you along the way. Now, as the big truck would say himself “Roll Out!” 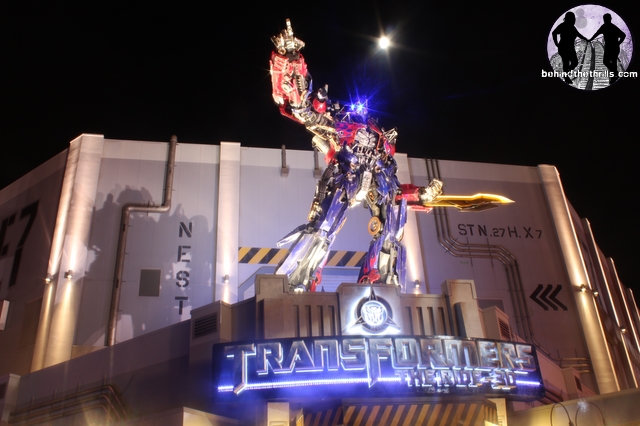 Transformers:The Ride 3D at Universal Studios Florida is a marvel of not only theme park technology, but also an amazing work ethic put forth by the creative and production team at Universal Orlando. A year and two days prior to the opening, the area that Transformers now sits on was an empty and forgotten Soundstage. Previously Soundstage 44 was used to house “Murder She Wrote” and “Herc and Xena” shows, but in recent years it had been left unattended.

“We have so many great people working behind the scenes, getting things in place, having things come together, making sure all the pieces fit.”

Transformers the Ride is the third attraction of it’s kind for Universal Parks. The ride has previously opened in Singapore in 2011, and Hollywood in 2012. When the success of the ride in those two locations started to become apparent, and fans in Orlando started clamoring for it, it was obvious that Universal had to get the attraction in Orlando as soon as possible.

“Transformers has such a great, and simple story of good vs. evil, told in such an amazing way” said Mike West “that when we saw the success and heard from the guests, we fast tracked this attraction immediately.” 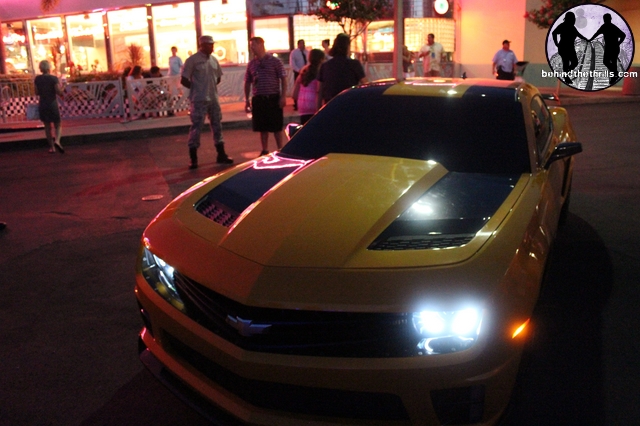 So how does the ultimate tale of good vs. evil told by using giant fighting robots hold out? Is it any good? The answer is no surprise.

Get a preview of the ride and see interviews as well as our firsthand review:

Let’s get into what the attraction is a little first. Transformers:The Ride takes guests into N.E.S.T. headquarters as they are scheduled to be trained and briefed about the All-Spark. N.E.S.T. stands for Non-biological Extraterrestrial Species Treaty, and their job is to keep humanity safe against the threat of attacks by mechanized space aliens, known as Transformers. Transformers are from the planet Cybertron and are here because their planet was destroyed. Cybertron had two types of robots, the Autobots and the Decepticons. The Decepticons were responsible for the fall of the planet. Now the only thing left, besides the Transformers is the All-Spark. The All-Spark is the life force of the Transformers, and has the ability to create new robots out of any electronic device. Of course the Decepticons are here to steal it, and enslave humanity. It’s the job of the Autobots to stop that from happening, and now it’s yours as well. 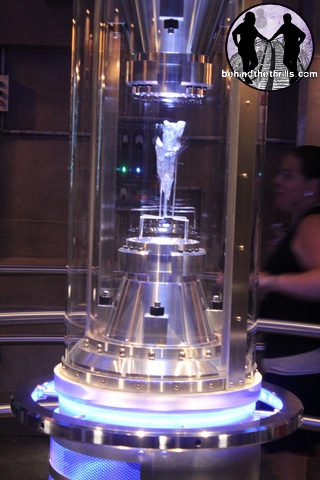 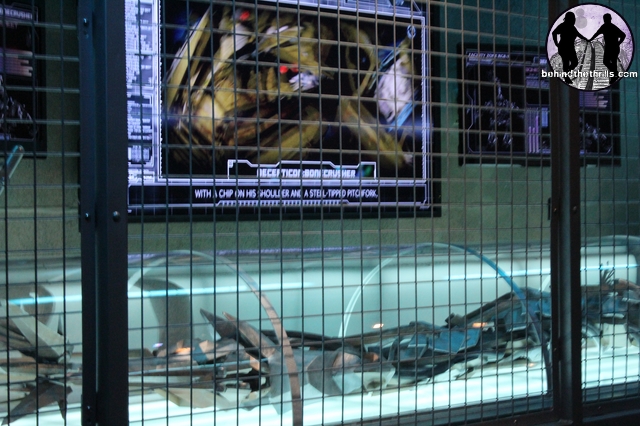 The ride itself is only one part of the attraction. It actually begins with the queue, which helps set up the story. Here we meet Ratchet, Ironhide and Optimus Prime who all tell us about the never ending battle. The building is very much a military installation, very cold and sleek. There are lots of buttons to push, and you should push them all. The line was designed to entice that natural instinct in us to push the things we shouldn’t. As you go through you find relics from the film and props used to help tell the story. 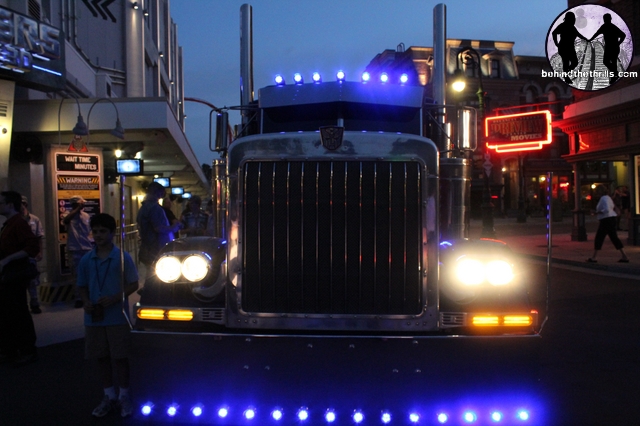 The ride itself is an amazing 3D adventure where guests board a Transformer, EVAC,and race around the city to get the All-Spark away from the evil Decepticons. The ride uses huge screens, and we mean huge, to bring the Autobots an Decepticons to life. Unlike rides like Spiderman, this building is 3 stories tall, and you go to the very top of the building…however…you have no idea that you’re up that far, because the transition is so seemless. All the motions are fluid and match up perfectly with the action on the screen, and the images are so crisp that even those who might get motion sickness normally, may find themselves not remotely affected at all. Speaking of Spiderman, there were so many concerns that this ride would be a clone of Spiderman. It is….in the ride system itself only. Just like Spiderman the ride uses a vehicle shaped the same, and takes you into an environment where the ride moves along with the screen where action is taking place, and that action is felt off the screen. That’s pretty much where the similarities end. Unlike Spiderman, the ride is photo-realistic and the screens are unbelievably huge. They are down right life sized…if Transformers were real. The story is also different. Instead of being a victim, where things happen to you, you are the hero and you ride along inside a real Autobot! You see the figure on the screen as you go through the line, then you turn the corner and he’s waiting for you to ride. You help him to get the All-Spark to safety. Spiderman still stands on it’s own as a great attraction, and while they are very similar in ride system design…it’s completely different at the same time. The ride delivers for thrill fans, and families alike on all levels.

Now what should you know to help you in battle?

It’s not enough that Transformers is a great ride. In true Universal fashion, the park takes guests on a journey and makes them part of the story. How? Several key elements that start with the queue. As we’ve said before, it’s interactive and engages the guests as they walk by. There’s no games, there’s no distractions to keep people in place like the “next gen queues” but it’s simple…people push buttons and they feel like they’re doing something they shouldn’t. There are screens debriefing new recruits about the ride, and then there’s the employees. Decked out in N.E.S.T. military fatigues, they bark orders rush you along and treat you like any military personal would in a civilian situation. If you’re lucky enough, you may also get the chance to see the soldiers training and marching:

Everything adds to a unique and immersive experience that you’ve come to expect from the Universal creative team.

Check out even more pictures from the media preview:

Transformers:The Ride 3D is now open at Universal Studios Orlando! Check back later today for more videos and pictures from the Grand Opening! Be sure to follow along on Twitter @BehindThrills

For more information about Transformers:The Ride at Universal Orlando, visit the official website by clicking here!

If we missed something, or there’s more you want to know, let us know in the comments below!