Halloween Horror Nights 23 will be “rooted” in evil when September finally rolls around. The park is already teasing with their logo, and even the official website. But what Evil has taken Root? Are we going to see some brutal trees, or is the event going back to their “roots” with old characters and Icons? Will there even be an Icon this year? So many questions, but will any of them be answered any time soon?

The official Halloween Horror Nights website (click here) has had a slight makeover in the past few days. From being declared “The Best” with Golden Ticket Awards and Testimonials, the simple teaser has “rooted” itself. What Evil Has Taken Root? That is a very loaded question. Is the evil a key word, with maybe Evil being the name apparent in most of the house titles? Or is Root the keyword? Will the event go back to it’s roots? Maybe it’s a bit of both.

While the speculation is running rampant, the only thing we’ll point out is one movie in the past year that had to do with both Evil and Roots.

The 2013 Evil Dead remake/reboot/whatever was a huge hit and is greenlit for a second chapter. It also included a very gruesome tree. It’s a brutal movie, and heavy on the gore. Could we see this film? Maybe, but not in the update. 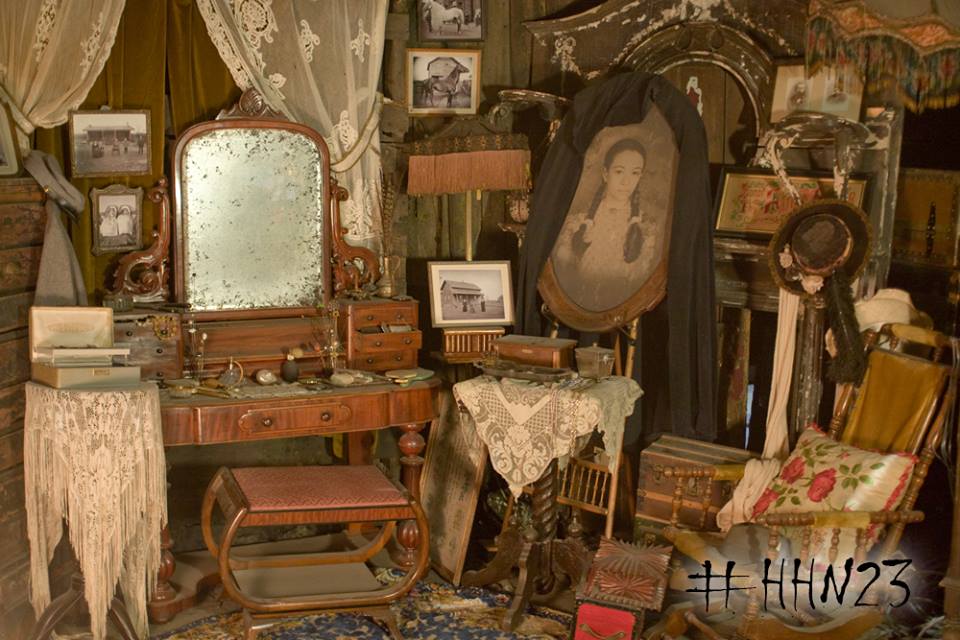 Well…we dare you to make out with that moose….

That’s the basement from Cabin in the Woods in which the hapless friends must choose their demise.

That’s right, Cabin In the Woods is the first house announced of 2013. Cabin in the Woods takes the horror genre and explains why we have the rules of horror movies that we do. It gives a great reason for everything bad that happens, and why it always seems to happen the exact same way.

“‘The Cabin in the Woods’ took the horror film genre and turned it on its head, and it’s a perfect fit for Universal Orlando’s Halloween Horror Nights,” said Michael Aiello of Universal Orlando’s Entertainment Team. “We’re collaborating with LIONSGATE and Drew Goddard to bring the iconic monsters from the film to our event. Guests will be assaulted by terrifying beasts taken right from the big screen – including the Hell Lord, the Dollfaces, the vicious Sugarplum Fairy, the Doctors and more.”

“This is a twisted dream come true for me,” said Goddard. “The Universal team has done an amazing job making all the terrifying aspects of ‘Cabin’ come to life, and horror fans will not be disappointed. Also, they said they’d let me dress up like a merman and scare people, so I’ll see you guys there.”

What can we expect from the house at Halloween Horror Nights? Let’s hope we will see….puppeteers.

There are several great visual things happening in the film, such as tons of Monsters, a creepy ass cabin and of course an unexpected ending. This will be one amazing house to pull off.

Now what about those roots? That’s a tricky one. Could we be looking at the eyes of our Icon peeking out from out of the darkness? Last year’s event had no traditional Icon and the story was just fine without it. Still, an Icon gives guests a focal point, a center of fear to concentrate all their attention on while the other characters creep up from behind. Could the root be some of the original Icons from the past? In 2010 we opened a “New Era of Darkness” which closed the doors on the past, for at least a while. While we would love to see new Icons and new faces, fans and newcomers all clamor for the past. Time is going to be the only way to see how far this “root” will spread.

Another image was revealed showing off what appears to be a face coming from the woods.  Could this be an Icon in the making?

For more information about Halloween Horror Nights in Orlando, visit the official website by clicking here!